Our 2019 Summer Mission to Armenia

Volunteer physicians from the Armenian EyeCare Project (AECP) and Children’s Hospital Los Angeles (CHLA) hit the ground running when arriving in Armenia for the AECP’s Medical Mission this past July.

Working together with CHLA and the Ministry of Health of Armenia, we held our 17th International Conference on Ophthalmology, Neonatology and Endocrinology in Yerevan during our Mission trip.

Over 400 medical professionals including ophthalmologists, neonatologists, endocrinologists and others participated in the two-day conference. Participants traveled from all over the world, from the United States to England to Australia as well as several Central Asian and Eastern European countries, to attend and learn the latest practices in ophthalmology and affiliating spheres. The growing popularity and attendance of the conference year after year signifies that Armenia is evolving into a knowledge export and medical tourism destination. 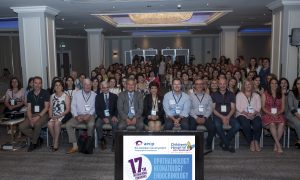 Hundreds gather at the AECP-CHLA 17th International Conference on Ophthalmology, Neonatology and Endocrinology

“I am glad that the Armenian EyeCare Project, with its partners, has been organizing international conferences in Armenia with professionals from different local and world-renowned hospitals and universities for almost 20 years,” Dr. Ohanesian said. “Through the EyeCare Project’s programs including our Mobile Eye Hospital, Regional Eye Clinics, Center of Excellence for the Prevention of Childhood Blindness and other initiatives, we not only promote the development of ophthalmology in Armenia but also create fertile soil for the creation of such programs in other areas of healthcare.”

In the  Conference’s opening remarks, Deputy Minister of Health Anahit Avanesyan spoke of the immense work and dedication by the EyeCare Project over the past 27 years of its service to Armenia, referencing tens of thousands of research, diagnostic and treatment interventions and surgeries; the introduction of vitreoretinal surgeries for infants in the country; invaluable professional and technical assistance and public education activities. “In short, a tireless job for the glory of the Motherland,” she said.

Also of great importance were the many meetings our physicians participated in with Armenia’s leadership, including Armenia President Armen Sarkissian, Minister of Health Arsen Torosyan and Deputy Minister of Education Arevik Anapiosyan. 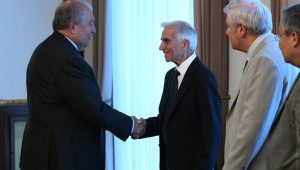 At the meeting with President Sarkissian, AECP physicians updated the President on all the programs and initiatives implemented by the Armenian EyeCare Project in Armenia. It was noted that in the first several years of the AECP’s activities in Armenia, our organization aimed to provide immediate care and humanitarian assistance to those with neglected eye disease and vision issues. In recent years, more emphasis is being placed on preventative care and in particular the prevention of potential blindness due to the development of eye disease with time.

President Sarkissian thanked our physicians for their continued work and programs in Armenia as well as activities aimed at the development of ophthalmology in the country and wished them much success in their future initiatives for Armenia. “I am proud that our compatriots from the Diaspora cooperate with their counterparts in Armenia and share their experience and knowledge,” President Sarkissian said.

Physicians also met with Armenia Minister of Health Arsen Torosyan to discuss the latest advancements in Armenia’s healthcare industry with respect to the EyeCare Project. This includes the recent launch of our large-scale School Screening Program for children throughout Armenia and the cutting-edge new medical record system being developed by both CHLA and AECP to facilitate this program – the Avetis Child Health Outcome Platform. Avetis will have the capability to provide data visualization and analysis, collect data from any healthcare provider and support both physician work and patients. 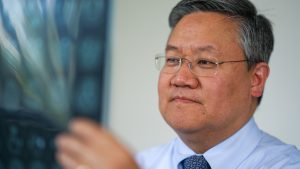 Dr. Thomas Lee, Director of the Vision Center at Children’s Hospital L.A., will be spearheading the Avetis Medical Platform in Armenia

In addition to these developments, AECP Country Director Nune Yeghiazaryan reported that the AECP’s Mobile Eye Hospital is currently traveling throughout Armenia to screen and treat those on the country’s poverty list. Also, that the AECP, with cooperation from the Minister of Health, has developed and opened four Regional Eye Clinics throughout the country – in the cities of Ijevan, Spitak, Kapan and Gyumri – with the fifth clinic to be opened in the Vayots Dzor province by 2020. Torosyan welcomed and praised the AECP’s work as a role model for health programs not only in Armenia but in other developing countries and thanked them for their continuous cooperation.

A meeting with the Ministry of Education also proved to be productive. AECP physicians spoke to Deputy Minister of Education Arevik Anapiosyan regarding its large-scale School Screening Program launched in Armenia late last year, reporting that 20,000 children in the country have already been screened through the initiative with more screenings scheduled. 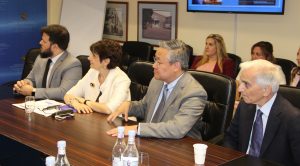 The program intends to screen every school-aged child in Armenia in hopes of early detection of eye disease and the prevention of possible blindness. Anapiosyan emphasized that preventing disease is of primary importance. She also mentioned the importance of public education in schools, thanked the AECP for our efforts and expressed readiness to support our organization in its activities in this sphere.

During the meeting, we also shared that the Avetis Child Health Outcome Platform is currently in development and will aid in collecting and providing information on the primary eye disorders found among children screened in Armenia in order to detect and possibly prevent these diseases in the future.

With steps to make preventative care a priority in Armenia – preventing eye disease from developing and possibly eliminating avoidable blindness in the country – we look to the glory of the Motherland and are proud of another successful Mission toward this greater goal for the country!