Anatomy of the Eye

The eye allows us to see and interpret the shapes, colors and dimensions of objects in the world by processing the light they reflect. The eye can see in dim light or bright light, but it cannot see an object when light is absent. The light rays are changed into electrical signals by the eye and they are then sent to the brain, where these electrical signals as interpreted as visual images.

The human eye can be compared to a camera that gathers, focuses, and transmits light through a lens to create an image of the environment. In a camera, the image is created on film; in the eye, the image is crated on the retina, a thin layer of light sensitive cells at the back of the eye. The lens of the eye bends, or refracts, light that enters the eye.

A clear, transparent covering in the front of the eye, called the cornea, also helps focus light on the retina. Nerve fibers, extending back from the retina’s nerve cells, come together behind the retina to form the optic nerve, a cable of nerve fibers that connect the eye with the brain. The optic nerve transmits messages about what we see from the eye to the brain. Like a camera, the human eye controls the amount of light that enters the eye through the lens under different lighting conditions.

Each eye includes a lens system to focus the image, a layer of photosensitive cells, and a network of cells and nerves that are all surrounded by a fibrous protective globe. The eyes are housed in protective bony structures of the skull called the orbits or sockets and measure approximately one inch in diameter. Layers of soft, fatty tissue protect the eye and enable it to turn easily surround the orbit. Six muscles are attached to the outside of the eyeball and regulate the motion of the eye; these muscles can contract and move the eyeball around, allowing us to look at different places in our field of vision without moving our heads. From the back of the eyeball extends a thick cord of fatty nervous tissue, called the optic nerve. These nerve cells, or neurons, collect, process and transmit visual information from the eye to the brain. Each eye is composed of a tough outer layer, consisting of the sclera and cornea; a middle layer, made up of the choroid, ciliary body and iris; and the inner layer of nerve tissue called the retina. The photosensitive retina connects to the brain via the optic nerve.

Visual acuity is the sharpness of vision determined by a person’s ability to discriminate fine details, and is measured by using eye charts and tests. The most common chart, used to measure visual acuity, is the “Big E,” or Snellen Chart. It contains letters of the alphabet arranged by line, with each line of letter from the bottom up increasing in size. Near the bottom of the chart is a row of letters that represents 20/20 vision. Most charts have a lower line that can measure vision better than 20/20. The single large letter at the top represents 20/200, which is the designation of legal blindness. Though we know the chart as the “Big E,” other letters are sometimes used and different languages and countries use other letters or symbols. 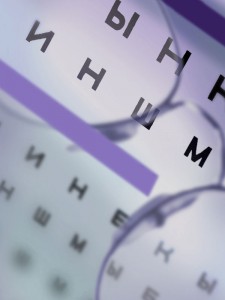 When the Snellen Chart is used, visual acuity is typically measured with a person seated 20 feet away from the chart. A person with normal vision, or visual acuity, has 20/20 vision, which means that at 20 feet, they can see the line of letters designated 20/20 or what people with normal sight see from a distance of 20 feet.

The eyes convert light energy in the wavelengths of 397 to 723 nanometers into electrical signals in the optic nerve. Images of objects are focused on the retina where the photosensitive cells convert the light energy to action potentials. Rods contain the protein rhodopsin, which contains a derivative of Vitamin A. Light bleaches the visual pigments, and this causes photochemical reactions to occur that amplify the signal. This information is transferred to the associated neurons, which integrate the signals and transfer the information to the brain. A single rod is able to detect a single photon of light but the rods are low-resolution detectors so that images are formed but without much detail. The human retina contains about 120 million rods. They very sensitive and are the receptors used when low levels of light are encountered. Peak sensitivity to light for rods is 505 nm, which is roughly green light. 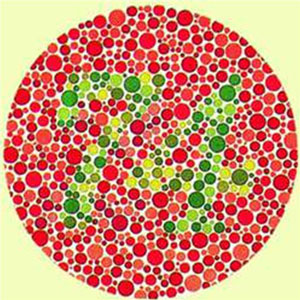 In the human eye, some 6 million cones are responsible for filling in the details and colors in a visual image. The cone photo pigment is called iodopsin. There are three types of cones (red, green, and blue) based on their maximum sensitivity to the visible light spectrum, which is determined by the particular variety of iodopsin produced by that cone. It is important to note that the sensation of any color can be derived from the proper mix of these three primary colors. Cones require a higher light intensity to illicit a response than the rods because they have a higher threshold for stimulation.