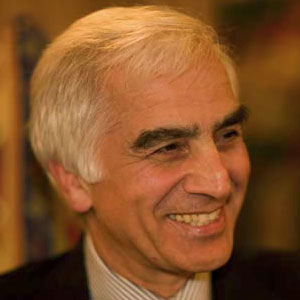 Born in 1940, Roger Ohanesian was the second child of George and Flora Roopenian Ohanesian, both first-generation Armenians living in Boston, Massachusetts. His grandparents had fled Armenia following a massacre in their village at the turn of the century. Flora and George Ohanesian were part of a large extended family, many of whom worked in science and medicine. Roger knew from an early age that he wanted to be a doctor.

Varastad Kazanjian, Roger’s uncle, a well-know plastic surgeon who received many awards for his innovative surgery techniques performed on World War I soldiers, was a large influence on Roger — but it was a favorite grandmother who was responsible for Roger becoming an eye surgeon. After unsuccessful bilateral cataract surgery, Roger’s grandmother was blinded and told Roger that her wish was that he would study and train so he could prevent others from going blind.

After high school, where he was an active Scout and achieved the rank of Eagle Scout, Roger attended Boston University followed by four years at the University of Vermont’s College of Medicine. His training continued with an internship at Upstate Medical Center in Syracuse, New York and at the National Institute of Health (NIH) in Public Health Services in Bethesda, Maryland. After completing his two-year NIH program, Roger decided to take a little time off and traveled to California to visit his sister who was living in Laguna Beach; this is where Roger would eventually settle. While enjoying California for six months, Roger worked as an emergency room physician in the San Fernando Valley and spent time with his sister and her five children in Laguna.

Roger began his specialty training in eye surgery at the Massachusetts Eye and Ear Infirmary, Harvard University’s Ophthalmology program. In 1970, while a resident at Harvard, he met Eileen Smyth, an English girl who worked in the personnel department, and they were married less than a year later. Eileen was the personnel supervisor at the hospital where Roger was a resident. After completing his training, Roger and Eileen moved to a suburb outside of Boston, where he entered private practice. He never liked the cold winters on the East Coast, so two snowy winters later, they packed their VW bus and traveled the country on a lecture tour — making their final destination Laguna Beach.

In 1975, Roger founded Harvard Eye Associates with offices in Laguna Beach and San Clemente. Another Harvard resident, Edward Kim, joined him in 1980 and the same year Roger and Eileen’s son, Andrew, was born. In 1988, Roger had what would be a very fortuitous meeting with Dr. Alex Malayan who was visiting from Armenia as the guest of a fellow Armenian ophthalmologist, Dr. Richard Kasper. Just four years later, during the aftermath of war and earthquake in Armenia, Roger received a facsimile requesting assistance from American ophthalmologists.

On September 10, 1992, Roger was two days away from leaving for a family vacation to England. His wife, Eileen, and son, Andrew, were already in the country and he was planning to meet them in London. Walking out of his office in San Clemente, he stopped to pick up a facsimile — a communiqué that not only changed his vacation plans, it changed his life.

The fax was a call for help from Armenia’s Deputy Minister of Health, through the American Armenian Medical Society, which desperately sought doctors to provide medical expertise in Armenia, a small nation torn by years of war, desperate economic hardship and a catastrophic earthquake the country was still reeling from.

Although Armenian by ancestry, Roger did not speak the language, knew very little of its culture, and could barely locate Armenia on a map. Still, he felt compelled to act. So, with his family’s blessing, he changed his flight from England to Armenia and began locating supplies. When he boarded the plane that Saturday, he had with him $10,000 worth of medicine and supplies donated from drug companies along with six corneas, living tissue that had a life span of just a few days.

What he found when he got there was a New Jersey-sized country whose supplies of food and fuel had been all but cut off by its warring neighbor, Azerbaijan, and its centuries-old border enemies, Turkey and Iran. In the capital city of Yerevan, electricity was turned on only a few hours a day, bread lines stretched two blocks, even at midnight, and armed skirmishes broke out in the streets.

Upon his arrival at the Republican Eye Hospital in Yerevan (now the Malayan Ophthalmological Center), Roger again met Dr. Malayan, its Chief of Ophthalmology. The conditions he found at the hospital were archaic — something Roger would later change. Often seeing as many as 60 patients in 20 minutes and with just one hour of electricity and running water a day, Roger elaborates on the conditions at the time: “We would be in the middle of an operation and the electricity would go out without warning. Somebody would have to run down seven flights of stairs to start the generator.” To save time and to stay warm, he would sleep, fully clothed, on a cot in the hospital. Some doctors, he says, never left the operating room during their stay.

Roger worked tirelessly for the next two weeks, treating about 300 patients and performing 40 surgeries. Nearly all those he treated were war casualties and about half were children.

One patient, Valodia Veropian, a 32-year-old soldier, had penetrating injuries to both eyes, which led to the loss of one eye after a failed surgery. Valodia had multiple problems with his remaining eye — the worst of which was a piece of shrapnel lying within his eye. Because surgery was impossible in Armenia due to the conditions and unavailability of the proper equipment, Roger brought Valodia back to California where he and his partner, Dr. Kim, performed a successful four-hour surgery. Within a week, and through today, the vision in his only eye is 20/20.

In a letter to him, Christine, a 14-year-old girl, wrote to Roger and asked him not to “abandon her.” In her only eye, she suffered from severe glaucoma and inflammation. Roger operated but she relapsed several months later. On return visits after several surgeries with diminishing success, Christine’s condition worsened. In 1997, Rick Hill, Chief of Glaucoma at UCI, went to Armenia with Roger to try one more time. Using a then-experimental valve, her vision was able to be preserved.

Since his first trip to Armenia, Roger has returned to the country over 50 times. He has brought along doctors who specialize in retinas, glaucoma, cornea and reconstructive surgery, as well as millions of dollars worth of medical equipment. Along with performing thousands of surgeries, the American doctors have provided training to Armenian doctors and helped in the creation of the country’s first corneal eye bank. They have also assisted in setting up a medical center in Nagorno-Karabakh, a tiny territory comprised of Armenians that’s geographically encircled by Azerbaijan, a country Armenia was at war with for years.

In 1994, the Armenian EyeCare Project was founded and since then, has sponsored patients to come to the U.S. for medical treatment as well as provide fellowships for Armenian doctors to train in the U.S., in conjunction with the Armenian American Medical Society of California. Specializing in areas like glaucoma, vitreo-retinal diseases and corneal-uveal diseases, these fellowships have proven extremely effective, allowing Armenia to now have some of the best medical practitioners in the region.

Armenia and the goals of reducing preventable blindness has become Roger’s life work — one that he continues to pursues tirelessly.