OPHTHALMOLOGIST CHANGES THE LIVES OF MANY WITH COUNTLESS TRIPS TO ARMENIA 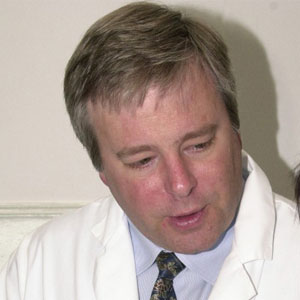 Dr. Rick Hill had no idea how much his life would change on that fateful Friday night when he received a page from Dr. Roger Ohanesian. Roger asked Rick if he would see Christine, a young girl who needed help and had already had three surgeries on her left eye. Rick immediately agreed. Then Roger told him that not only was the patient in Armenia, but that they must leave the following Wednesday. “No problem,” Rick responded.

When people hear this story, they often question Dr. Hill about why he so readily agreed to fly to Armenia on a moment’s notice. “I can tell you there is no thought,” Dr. Hill responds. “Only a feeling of what must be done.”

Rick and his wife, Melissa, live in Irvine, California, and have two sons, Richard and Travis. The family loves to travel and Dr. Hill actively participates in Soo Bahk Do, a classic Korean martial art. He also loves to juggle.

While pursuing a variety of activities and balancing his energetic family life and challenging medical career, Dr. Hill, the AECP’s most active volunteer physician, has traveled to Armenia more than 20 times at his own expense.

While there, he has conducted thousands of eye exams and performed countless surgeries that have changed the lives of innumerable Armenians, many of them children. Along with the protracted hours he spends performing surgery and examining patients in Armenia, Dr. Hill has developed and written an advanced medical and surgical ophthalmology residency curriculum, recently adopted by Armenia for its medical training programs.

On the last day of his 1998 medical mission in Armenia, Dr. Hill was catching some much-needed sleep before boarding the morning flight back to the States. After a full day of seeing patients, he found himself being gently shaken awake. A family had brought their child, suffering from congenital glaucoma, to the clinic. When they heard about the American doctors and their work in Yerevan, the family traveled all the way from Ukraine. Dr. Hill could not refuse their request for help.

“I have no idea where the energy comes from,” he says. “But it does… and a few minutes later we were back in the operating room.”

What happened next presented Dr. Hill with an immense challenge. “As I passed a small blade across the inside of the eye, the power failed,” he said, adding that because the country was at war at the time, blackout curtains were over the windows so it was extra dark. “If I moved one millimeter the wrong way, I could blind the child. Suddenly, my four-cell krypton diving light, which the Operating Room nurse had sterilized and wrapped in case of an emergency, snapped on and I was able to finish the surgery. Another triumph for Armenian ingenuity.”

Two years later, Dr. Hill was pulled from a conference and told his patient was asleep in the operating room awaiting an examination. “As I filed past the long rows of watchers, I realized it was the child I operated on two years ago. He had not seen a doctor for two years because I had done the surgery and, of course, all was well. I tried not to let my fear show or my hands shake as I checked the pressure,” he explains. “The pressure was completely normal and, by history, the child was developing excellent vision. The parents were surprised that I would have any concerns. They knew everything was perfect after the surgery.”

“Personally, for me, this was an amazing display of faith,” Dr. Hill recalls. “I think of this child often when I need inspiration or motivation.”

Dr. Hill is a recipient of several National Institutes of Health grants and has served on National Institutes of Health Study Sections. His research efforts focus primarily on the medical and surgical treatment of difficult Glaucomas and his work has resulted in many publications, including an article about the AECP’s experience treating complicated pediatric Glaucomas, which was accepted for publication in the British Journal of Ophthalmology. Based on research productivity, teaching and his efforts in international ophthalmology — especially in Armenia — Dr. Hill was awarded the University of California, Irvine, Faculty Achievement Award.