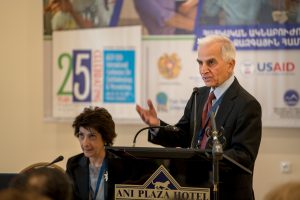 The key to the EyeCare Project’s success over the past 25 years has been the transfer of knowledge to Armenian ophthalmologists through medical education.  It is an important component of the Semi-Annual Medical Missions to Armenia from the U.S. and during these visits, U.S. ophthalmologists share their knowledge with their Armenian colleagues through surgery, patient examinations and classroom learning.

In 2003, recognizing the enormous value of these conferences and the need for Armenian physicians to have this knowledge to increase their capacity to delivery ophthalmology care, the EyeCare Project has made it a tradition to host annual international conferences since 2003. The conferences are developed in partnership with U.S. and Armenian medical associations, medical schools and pharmaceutical and medical manufacturing organizations. 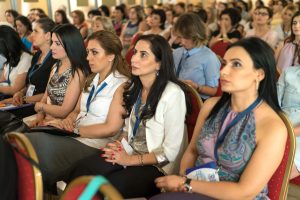 Conference topics include a wide scope of ophthalmological issues and all of the main subspecialties. Prominent U.S. specialists from the finest universities and research centers participate as key speakers, greatly enriching the professional discussion and promoting the reputation of the conference. Since 2012, the EyeCare Project International Conferences has gained wide acceptance and specialists from different countries and diverse regions, such as Central and Eastern Europe, Central Asia, the Caucasus and the Middle East now attend creating a rich learning environment.

Held in Yerevan the past 15 years, more than 3,000 specialists have participated in the Project’s International Ophthalmology Conferences.  In addition to traditional ophthalmology issues, during recent years Children’s Hospital of Los Angeles has joined the EyeCare Project’s Initiative and now has an important role to expand the scope of the conferences by including retinopathy of prematurity and neonatology to eliminate the blinding disease. About 300 physicians and neonatal nurses from more than 10 countries attended the conference in 2017. 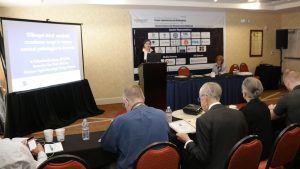 The conference focuses on current topics in the field of ophthalmology and those most important for Armenian ophthalmologists to learn.  In 2017, the Project embarked on a major initiative with the World Diabetes Foundation to eliminate diabetic retinopathy through early diagnosis with retinal cameras and laser treatment.  The country of Armenia and the EyeCare Project has prioritized diabetes as a public health concern and the Project and its partners will add diabetes-related eye diseases to the conference’s topics in 2018.