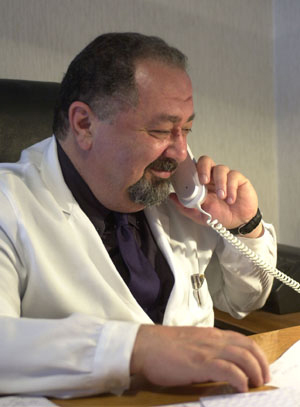 AECP’s history includes a rewarding relationship with three generations of the Malayan family.

In 1988, AECP Founder & President Dr. Roger Ohanesian had what would be a very fortuitous meeting with Dr. Alex Malayan in California. Dr. Malayan was visiting from Armenia as the guest of a fellow Armenian ophthalmologist, the late Dr. Richard Kasper.  Just four years later, during the aftermath of war, the collapse of the Soviet Union and a devastating earthquake in Armenia, Roger received a facsimile from Armenia’s Ministry of Health requesting assistance from American ophthalmologists.  Upon his arrival at the Republican Eye Hospital in Yerevan, Roger would again meet with Dr. Malayan, the Chief of Ophthalmology in Armenia, and start what would be a rewarding partnership for years to come.

Dr. Alex Malayan follows in the footsteps of his father, Sergey Malayan, for whom the Republican Eye Hospital is now named the S. Malayan Ophthalmological Center, and where Alex serves as Director. “My father was an exceptional person,” Dr. Malayan says. “I think one of the most important things in his life was the establishment of the hospital in 1978.”

Ophthalmology is a Malayan family tradition. Within Alex’s extended family there are seven ophthalmologists and one pulmonologist (lung doctor); the latter is his wife, Karine. Although Sergey wanted his son to become an ophthalmologist, he never pressured Alex to do so. “I thought, as an ophthalmologist, I can achieve more than in any other specialty,” he says.

Now an ophthalmologist for over 30 years, Alex calls his profession gratifying. “I like to see the hope in the beginning and a thankful glance of a patient and their family when it is all over,” he says.

As a young doctor, it was quite an experience for Alex to work with his father. “It was not only useful, but also very responsible and sometimes scary,” he says. “The threshold has always been very high.” Alex’s father, Sergey, founded the Republican Eye Hospital in 1978. It was renamed in Sergey’s honor in 1996.

As Director of the Malayan Ophthalmological Center, Alex has witnessed the incredible progress his hospital has made through the years — thanks in part to the Armenian EyeCare Project. Physicians at the hospital have doubled since the facility opened and once the AECP began its relationship with the hospital in 1992, the ophthalmologic center expanded in terms of treatment and diagnosis.

Fellowships sponsored by the AECP gave ophthalmologists the opportunity to receive advanced medical training in the U.S. and later return to Armenia to open Subspecialty Clinics in their field of expertise, many of them located inside the Malayan Ophthalmological Center.

“Back in the 1990s, when severe reductions in terms of patient care, medication and equipment were common for all hospitals, we managed to avoid all that thanks to the AECP,” Alex says.

Alex also has praise for the AECP’s Mobile Eye Hospital (MEH), where he conducted surgery on the very first day of its operation. “It is a wonderful means and device for the residents of Armenia,” he says. “Apart from doing surgeries it serves as an impetus for the development of ophthalmologic services in Armenia’s various regions, with trained specialists. The Mobile Eye Hospital is a training device and is used for those purposes too.”

Overall, Alex feels the AECP has made a priceless contribution to Armenia. “There’s more rationalism, efficiency and professionalism in our clinic because of this organization,” he says.

On the rare occasion when Alex has free time, he likes listening to music and planting flowers. “I like to do nothing, which is also serious work,” he says with a smile.