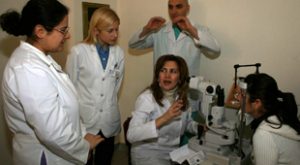 Medical Education and Training are the cornerstone of the Armenian EyeCare Project’s Five-Point Strategy, which also includes Direct Patient Care, Public Education, Research and Capacity Building. The synergy created by the five programs is designed to achieve the Project’s mission — providing access to quality eye care for all Armenians and to eliminate preventable blindness.

As a component of Medical Education and Training, Fellowships are the Project’s key program and were the Project’s first training program, in 1997. The Retina Fellowship at the University of California, Irvine, with Armen Vartanian under the guidance of Dr. Richard Hill, was very successful as the first of eight Fellowships at major medical institutions throughout the United States. They include Retina, Glaucoma, Cornea-Uveitis, Neuro-Orbital, Low Vision, Eye Bank and Pediatrics.

All participating fellows have returned to Armenia to establish and direct clinics in their subspecialties at major hospitals. Retina, the first Clinic, directed by Armen Vartanian, was established in 1997. The most recent Clinic, Pediatrics, was established in 2009, with Ruzanna Hartunian. In total, the fellows and their colleagues have seen 668,000 patients in their subspecialty clinics through 2017. 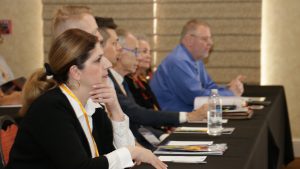 As the cornerstone of the training program, the Fellowship Program has a superior reputation in Armenia, the United States and other areas of the world. By training physicians equal to U.S. standards in important subspecialty areas, the variety of diseases that can be treated and the quality of treatment have increased significantly. In addition, those physicians have been able to return to Armenia and to train their colleagues — the next generation of Armenian physicians — to work alongside them, becoming, in Dr. Roger Ohanesian’s words, “self-fulfilling.”

Dr. Armen Vardanyan, the first AECP Fellow, studied under Dr. Barry Kuppermann, a world-acclaimed retinal surgeon, at the University of California, Irvine (UCI.) Chosen in 1996, the first AECP-AAMSOC (Armenian American Medical Society of California) Scholars participant, Dr. Vardanyan views his selection as “both a great honor and a big responsibility.”

Dr. Vardanyan returned to Armenia and in 1998, as Director of Retinal Services, established the Retina Clinic at the Malayan Ophthalmological Center — the Project’s first subspecialty clinic. The clinic specializes in vitreo-retinal disorders and treats those who experience loss of sight that can’t be fully corrected with eyeglasses, contact lenses, medicine or surgery — about 3,300 patients a year.

Since Armenia declared its independence, and particularly in the last 10 years, Dr. Vardanyan has seen drastic changes in his country — in medicine and ophthalmology, especially. The EyeCare Project has changed the landscape of eye care in Armenia as it has transitioned from a centralized Soviet system to decentralized delivery of care and Dr. Vardanyan feels fortunate to be a part of this transition. As the first AECP Fellow and the Director of the AECP Retina Clinic, Armen has the opportunity to help his country fulfill its promise.

In her capacity as Chief of Glaucoma Surgery at the Malayan Ophthalmological Center in Yerevan, Dr. Lilit Voskanyan, an extraordinarily gifted surgeon, specializes in the disease that damages the eye’s optic nerve. She sees more than 50 patients a day — treating 18,000 patients annually. In her role as a surgeon, she performs about 15-17 surgeries a week.

Dr. Voskanyan, the AECP’s second fellow in 1999, studied under Dr. Richard Hill, at the University of California, Irvine (UCI.) The most important thing Dr. Voskanyan learned while she trained in the United States was “to treat patients very well and be attentive.”

As Chief of Glaucoma Surgery, Dr. Voskanyan considers teaching one of her most important roles and credits her mentor, Dr. Hill, for her teaching skills. Today, she supervises about ten physicians in the Glaucoma Clinic.

In the last few years, Dr. Voskanyan has added research to her work load. She is much sought-after in the academic and research worlds as a talented researcher and teacher and speaks at many medical conferences. In her capacity of researcher for Glaukos Corporation, leaders in transforming glaucoma therapy, Dr. Voskanyan performs a number of clinical trials to advance the treatment of Glaucoma, the second-leading cause of blindness, affecting approximately 78 million people worldwide.

Describing the rewards of her work, Dr. Voskanyan said, “Many people in Armenia, including lots of children, need help because of their glaucoma disease. When you can save their sight, and even restore their vision, that’s great.”

Opened in 2001, and directed by Dr. Anna Hovakimyan, the Corneal-Uveitis Clinic is located in the Malayan Ophthalmological Center in Yerevan and serves nearly 20,000 patients annually. Specializing in disorders having to do with the outer layer of the front of the eye (cornea) and middle layer of the eye (uveitis), Dr. Hovakimyan treats approximately 50 to 100 patients per day and performs about 1,000 surgeries annually — including corneal transplant surgeries, stem cell surgeries, and more.

Dr. Hovakimyan was awarded a one-year fellowship at the prestigious UCSF Proctor Foundation in San Francisco, California in 1999. After the fellowship abroad, Dr. Hovakimyan returned to Armenia to establish subspecialty clinics at the Malayan Ophthalmological Center where they deliver outstanding medical care comparable to U.S. standards of care.

Dr. Hovakimyan attributes a great deal of her success as a corneal-uveitis specialist to her AECP fellowship. “I like that I am referred many interesting patients whom I would never diagnose if I had not received training at the Proctor Foundation,” she said. “Even if I had not encountered a similar patient in the U.S., I heard about the disease and I can recognize the pathology. I have many nice books brought from the U.S. and I look over those books, become sure of my diagnosis and begin treatment. When the patient gets a positive result, it makes me extremely happy.”

Following her fellowships in New York and India, Dr. Armine Gharakeshishyan returned to Armenia to open the AECP Neuro-Orbital Clinic at the Malayan Ophthalmological Center in 2008. She sees approximately 4,000 complicated cases each year and specializes in thyroid ophthalmia, ptosis (drooping eyelids), strabismus (eye deviations) and aesthetic problems with the eyelid.

In theory and in practice, Dr. Armine Gharakeshishyan made the most of her one-year AECP fellowship.
For the first six months, she trained in neuro-ophthalmology and orbital surgery (facial reconstruction) under the auspices of Dr. Steven Feldon, Director at the University of Rochester Eye Institute in New York. For the second six months, Gharakeshishyan applied what she learned by performing surgeries at the LV Prasad Eye Institute in Hyderabad, India.

Through her fellowship, Dr. Gharakeshishyan has become experienced in a subspecialty that had not been developed in Armenia — reconstructive, or plastic, surgery. Now, the orbital surgeon is able to offer these services to those who want them in Armenia.

The Neuro-Orbital Clinic Director also says she is grateful to have had the opportunity to work with so many talented surgeons in the best clinics in the world through her fellowship. “Every doctor wishes to have such an opportunity,” she says.

The AECP Pediatric Clinic, directed by Dr. Ruzanna Harutunyan, sees approximately 6,000 children a year. Pediatric Ophthalmology is a subspecialty of ophthalmology dealing with problems common to or seen exclusively in infants and children. Following their specialty training in ophthalmology, pediatric ophthalmologists complete one year or more of subspecialty training in the diagnosis and treatment of infant and childhood eye disorders and diseases.
In the Pediatric Clinic, Harutyunyan performs about eight surgeries each week and examines approximately 30 children each day. “Every one of them is my favorite,” she says.

Much different than adults, a child’s eye exam focuses more on specific aspects of the eyes. Beginning in the preschool years, a number of conditions can be detected early. These include refractive errors — nearsightedness, farsightedness and astigmatism; strabismus — a misalignment of the eyes or eye muscle disorders — often referred to as “crossed” or “lazy eyes”; and blocked tear ducts.

“Correcting vision problems and treating eye diseases is important at any age, but for children it can be especially important,” said Dr. Harutyunyan. “It gives me great happiness to be able to bring sight to a child.”

At the same time Harutyunyan is diagnosing and treating children, she is teaching other doctors the art and science of pediatric ophthalmology. Training and working with five physicians in the Pediatrics Clinic, she considers teaching an important part of her job. “I enjoy teaching them as much as I can and seeing the results,” she says.

Dr. Harutyunyan has become very well-known in the diagnosis and treatment of Retinopathy of Prematurity (ROP) — a potentially blinding eye disease seen in premature infants — and speaks at a number of international conferences. The diagnosis and treatment of ROP is new to Armenia and the Caucuses since the EyeCare Project opened the Center of Excellence for the Prevention of Childhood Blindness and established its ROP program.

Opened in 2005, and directed by Dr. Lilit Mkrtchyan, the Low Vision Clinic treats approximately 7,000 patients a year and is located at the Kanaker Zeitun Medical Center in Yerevan. The clinic opens a new world for the visually impaired and treats those who experience loss of sight that can’t be fully corrected with eyeglasses, contact lenses, medicine or surgery.

The only center of its kind in the Caucuses, the Low Vision Clinic works with patients who have impaired sight and teaches them the vocational and life skills they need to be fully functioning members of their community. With low vision impacting daily activities — reading, cooking, watching television, and using the computer — patients benefit from this specialized training not available anywhere else in the Caucuses.

“For people with visual impairments, the possibility of using a computer is a big step forward in obtaining access to information, learning new skills and gaining computer literacy,” says Dr. Mkrtchyan. In addition to the Computer Training program for adults, thanks to the Low Vision Clinic, over 20 children from School No.14 for the Visually Impaired have the opportunity to participate in specialized Low Vision training classes. The goal of the training program is to provide visually impaired adults and children with the highest possible level of independence.