Eye Screenings in Khndzoresk and Karashen: Donor Visits Villages She Adopted in Armenia

Earlier this year, we shared the story of how one dedicated donor – Armenian-American author, lecturer and activist Anna Astvatsaturian Turcotte – was able to adopt two villages in Armenia by selling her embroidery work to friends and family online. Raising nearly $1,500, Anna chose to sponsor eye screenings for residents in two villages in Armenia that mean a lot to her – Khndzoresk and Karashen – because it is where her grandparents were from.

Because of Anna’s efforts, on May 4-8, 2019, over 500 residents – 172 adults and 338 children – in Khndzoresk and Karashen were able to get their eyes examined during scheduled eye screenings in these two villages located in the Syunik Province. 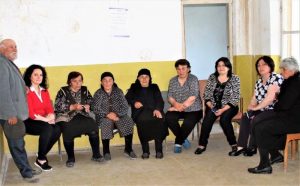 Better yet, Anna was able to visit one village she adopted during her recent trip to Armenia and see what a difference these screenings made for people in the community. She met and shared moments with residents, from small children to the elderly, some of whom were getting their vision checked for the first time due to a lack of access to care in the remote area.

One screening, for children, was held at the Khndzoresk Secondary School and the director of the school, Mrs. Valentina Balayan, noted its importance for her students. “These eye screenings are vital for our children,” she said. “They raise awareness for students and their parents about the importance of regular eye check-ups and eye care.”

Mrs. Magda Baghdasaryan, who has been working as the only family nurse at the ambulatory in Karashen, also deeply appreciated the opportunity to organize eye check-ups in her native village. She said that residents in her village usually didn’t receive detailed eye examinations because of financial difficulties. 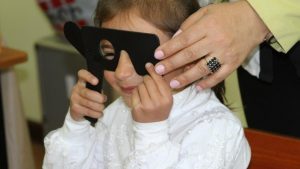 During the screenings in Khndzoresk and Karashen, residents who showed vision problems were given more detailed eye examinations and those who need treatment will be able to receive it at no cost at our nearest facility, the AECP Kapan Regional Eye Clinic in Kapan.

We would like to thank Anna again for making these eye screenings and treatments a possibility for residents in Khndzoresk and Karashen who so often do no have access to care. Because of Anna’s efforts, hundreds of Armenians in these two villages have received the quality eye care they need. If you are interested in adopting a village and making a difference for an entire community in Armenia, see what other villages are currently available for adoption through our Adopt-a-Village Program.