The Armenian EyeCare Project is pleased to announce that we have officially launched our eye screening program for preschool-aged children thanks to our crowdfunding campaign with Fund for Armenian Relief‘s (FAR) Ayo! crowdfunding platform. We will be using innovative approaches to detect, prevent and treat vision disorders and eye diseases that are known to have a negative effect on children.

This screening program became possible thanks to our cooperation with FAR’s Ayo! crowdfunding platform, which organized the #VisAbility campaign and raised funds for the screening of 12,500 children between the ages of three and five throughout Armenia. The raised funds from this campaign will cover about half of all children attending kindergartens throughout the regions of Armenia and will also include detailed examinations and eyeglass prescriptions for those children identified as having eye disorders. 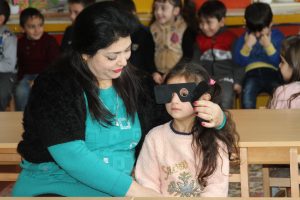 The official launch of this program began on December 2, 2019, when the Armenian EyeCare Project conducted eye screenings at “Ardzagank” kindergarten in Gyumri.  Ayo! staff as well as representatives from IDBank, a large contributor to the campaign, were present at the screening. IDBank, which sponsored screenings for all kindergarten students in Gyumri, said they were very happy to see that their donation to the Ayo! campaign and to the AECP is already benefiting children.

On this first day of eye screenings, 60 children between the ages of four and five underwent eye check-ups and got the chance to have their eyes examined with the portable auto refractometer.

Mrs. Julieta Avetisyan, Director of “Ardzagank” kindergarten, greatly appreciated the opportunity to have free vision screenings for children at her school.  “We have 153 children attending this kindergarten and many of them are socially vulnerable,” Avetisyan said. “So these free eye check-ups are a great support!” 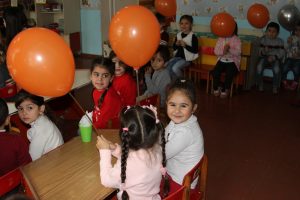 The first day of the screenings concluded with sharing colorful balloons with the children and featuring a fun puppet theater, organized by IDBank. “Attaching importance to the health of children and to the need of detecting certain diseases at this young age, IDBank has decided to support FAR’s #VisAbility program within the framework of its corporate social responsibility program.” said Tatevik Vardevanyan, Head of Communications at IDBank.

AECP’s Country Director Nune Yeghiazaryan noted: “The Armenian EyeCare Project has screened about 200,000 children in Armenia through its various programs over the years. However, this is the first project that specifically targets preschool-aged children between the ages of three and five throughout Armenia. We are very excited to begin this program and help identify and prevent eye diseases at this early age with more potential to treat them.”

AECP’s preschool screening program, made possible thanks to Ayo!’s crowdfunding help and the generous support of 110 donors, will cover kindergartens in all regions throughout Armenia and will run until July 2020.