Since 2003, our Mobile Eye Hospital has been traveling throughout Armenia to offer sight-saving eye care services, including surgery, to the many residents living in remote regions in the country. These beneficiaries, who are often on the country’s poverty list and do not have the means to pay for care or travel far to receive it, have had their lives changed through our fully functioning surgical suite on wheels, which brings quality eye care to them!

Largely considered the hallmark of the Armenian EyeCare Project, our Mobile Eye Hospital – equipped with an up-to-date operating room and two exam rooms – delivers eye care to tens of thousands of Armenians per year who otherwise wouldn’t have access to this care. Here are the stories of three Armenians who recently received their sight-saving surgery.

Gregory is one of the Armenians who fled from the Sumgait massacre in Azerbaijan in 1988. Although he was among the lucky ones to survive, he misses his home and his village where he lived. Now Gregory lives in the small Armenian village of Chambarak with his wife.

About two years ago, cataract blinded his left eye, leaving only his right eye with sight. Although it was difficult to work with poor vision, Gregory continued his job as a watchman on the shore of Lake Sevan.

“I am used to earning my living,” Gregory said. “I cannot stop working now.”

Gregory knew he needed cataract surgery but could not afford its cost. When he learned about the Armenian EyeCare Project and our Mobile Eye Hospital, he was in disbelief that he could receive this surgery that he needed so badly for free.

“No one has ever done anything free of charge for me,” Gregory said. “It is amazing that such an organization exists!”

Gregory received the cataract surgery he needed aboard our Mobile Eye Hospital and is doing great! 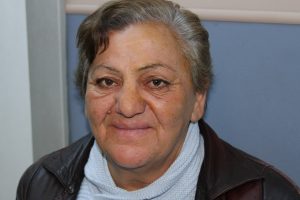 Raya is a housewife with five grandsons and a husband who lives in Russia. She helps her son take care of their fruit garden and the domestic animals they have. Despite living with cataract and diabetes for 10 years, Raya does her best to help her family even though the work is very hard.

Recently, she reached a point where not even wearing eyeglasses was helping her vision. But last year, Raya was able to receive cataract surgery at no cost on our Mobile Eye Hospital. Now, she can see.

“It was painless, easy and very effective,” Raya says. “Now I can see perfectly well. It is wonderful work that the Armenian EyeCare Project carries out for our people!” 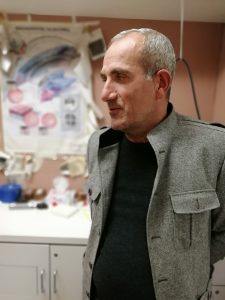 Since childhood Hovhannes has had vision problems. About 10 years ago he also developed cataracts. By the time Hovhannes underwent an operation in the AECP’s Mobile Eye Hospital in 2019, his vision had reached minus 20.

To make a living and support his family, Hovhannes runs his own small produce stand where he sells vegetables grown on his farm. Although he works day and night, his income is barely enough to feed his family.

Hovhannes says that without the help of the AECP it would have been impossible to fix his vision. Both of Hovhannes’ eyes were operated on by AECP physicians aboard our Mobile Eye Hospital and he is very happy with the results.

Hovhannes expresses gratitude to the donors and staff of the AECP for the kind work they are doing. He says he never imagined it would be so easy. All he did was visit his local doctor who referred him to our Mobile Eye Hospital, where he got examined and received his cataract surgery free of charge. He says it’s the closest thing to magic he’s ever experienced.

Every patient that the AECP is able to help with restored sight is beyond meaningful and each reaction from our beneficiaries is priceless. Thank you to our donors for making this life-changing work possible! If you would like to continue to support our work, please consider making a contribution here.