In 2016, the Armenian EyeCare Project noticed an incredible need for cornea transplants among patients in Armenia. So we began a Cornea Transplant Program, asking donors to sponsor the surgery for those who needed it — a cost of $800 for one procedure. Over 70 Armenians have regained their sight through this program and there are many more on the waiting list. Below are the stories of two Armenians who have received cornea transplants because of your support and one who is still awaiting surgery. 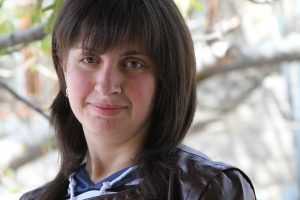 Aida was 16 when doctors diagnosed keratoconus in both her eyes — a disease that leads to blindness if left untreated. Since that time Aida’s family has had to spend a lot of money to cover her treatments. In 2012 they were barely able to come up with the money for Aida’s surgery. That year the treatment in her right eye was quite effective, so they forgot about the diagnosis for a while.

Around the same time, Aida graduated from high school and began to attend design courses. She was passionate about making handcrafts and spent her time creating beautiful artwork and presenting her work in various exhibitions. Recently she noticed that her eyesight was getting blurry again.

“My daughter almost lost the vision in her left eye,” Aida’s mother, Anushik, said. “The poor vision gave Aida headaches and she grew tired very quickly. It frustrated her and our entire family very much.”

Luckily, during a visit to the Malayan Ophthalmological Center in Yerevan, Aida and her family learned of the Armenian EyeCare Project and our Cornea Transplant Program, which matches donors with socially vulnerable patients in Armenia in need of corneal surgery. Eventually, Aida became a beneficiary who would regain her vision through this program.

“Aida’s vision gradually improves and doctors say it will continue to get better and better,” Anushik said with a smile. “For five years we were struggling against this disease and finally Aida has been able to get better. God bless all the people who have helped my child!”

“Nobody understands how I can shave my face with such poor vision, how I can keep my house clean and take care of myself alone,” Arshavir says. “Since my wife’s death I have learned to do everything by myself. For me it is difficult to go out, but there are kind people in my neighborhood who help me.”

Arshavir had never experienced vision problems until five years ago, when he received cataract surgery in both eyes. It seemed that the problems were solved at first but a year later he started experiencing blurred vision in his right eye and then his left. Medication did not help and because Arshavir lives in poor conditions, there was little he could do to fix the problem.

“It is okay, I am an optimist,” Arshavir says with a shy smile. “I hope that one day there will be a possibility to solve my vision problems. If I am able to receive surgery, the first thing I will do is go to church and light a candle for the miracle.”

Arshavir’s prayers were finally answered when he received cornea surgery on both eyes last year at no cost. He went to church and lit a candle, like he said he would, and expresses deep gratitude for the “miracle” made possible by the AECP and its donors. 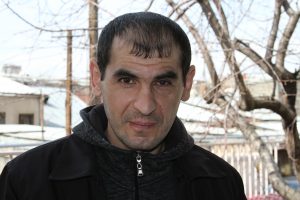 While most people enjoy the seasonal transformation of nature, Aren spends this time fighting against the progression of his disease. Since childhood, Aren has suffered from ocular herpes, which is a viral infection that causes inflammation and scarring of the cornea.

“Just before the Christmas holiday my infection came back,” Aren said, “I am not sure what the reason was, maybe flu season or the dust at my workplace, but after that I nearly lost all the vision in my left eye.”

Aren’s doctor, Dr. Anna Hovakimyan, explained to Aren that ocular herpes, or eye herpes, affects the cornea and that the most effective treatment would be to receive a cornea transplant.

“At that moment I had mixed feelings,” Aren says. “On one hand, I was happy to hear there is a solution to my problem and on the other, I know I could never afford such an expensive surgery.”

Recently, Aren had to quit his job because of his eye condition, since poor vision doesn’t allow him to work as a house painter anymore. He, his wife and their two adorable children live primarily on Aren’s disability pension and at times Aren has to take out loans to cover his family’s daily expenses.

“Now you can understand what this opportunity means to me,” Aren says of the possibility to have his cornea transplant funded by a donor. “It has become my dream! This surgery would help me return to my favorite job and allow me to take care of my family once again.”

If you would like to sponsor a cornea transplant for Aren or any other Armenian in need, please donate to our program or contact us. It costs just $800 to sponsor a surgery that can change someone’s life. For more stories on patients who have received corneal transplants in Armenia through our program, please read our many other patient stories.