The Basics of Sports Safety 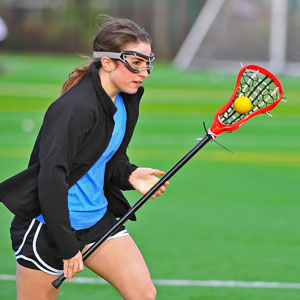 Lots of people – at all ages – are injured while playing sports – but getting hurt doesn’t have to happen. A few sports injury prevention steps can help to keep everyone in the game. Read on to learn the basics of sports and exercise safety.

Did you know that playing tennis with a badly strung (too loose or too tight) racquet while wearing worn-out shoes can be just as dangerous as playing football without shoulder pads?

Using the wrong – or improperly fitted – equipment is a major reason why teens get injured. The equipment you wear while participating in sports and other activities is key to preventing injuries. Start with helmets: They are important for sports such as football, hockey, baseball, softball, biking, skateboarding, in-line skating, skiing, and snowboarding – to name just a few.

Eye protection also is a must for many sports:

Mouth guards can protect your mouth, teeth, and tongue:

Not only is the right kind of equipment important, so is the right fit. If you don’t know if your equipment fits properly, check with a coach, gym teacher, athletic trainer, or parent to make sure you have the right size and that you’re wearing it correctly. Many sporting goods stores can also help you find the right fit. The bottom line: Wearing the right equipment with the right fit dramatically decreases your chances of getting hurt.

Warm Up to Keep Your Game Up

Don’t rush into any sport or exercise without warming up first – muscles that haven’t been properly prepared tend to be injured more easily. Start out with some light cardiovascular activities, such as easy jogging, jumping jacks, or brisk walking, just to get your muscles going.

Follow your brief warm-up with some stretches. “Stretching is important after warm-ups because your tissues will be more elastic [flexible] due to the increase in heat and blood flow to the muscles,” explains Michael Stanwood, a sports medicine specialist.

In addition to warm-ups and stretches, practice sessions are also an excellent preparation for most sports or activities. If you belong to a team, attend as many team practices and games as possible. This will put you in top physical condition and help you and your teammates work together – and knowing how your teammates play will help prevent injuries.

Even if you don’t belong to a team, you can use regular workouts and practices to enhance your performance and lessen the chance of injuries. Remember, if a tool isn’t used, it gets rusty, so keep yourself in top shape with regular practice. For instance, try doing tennis drills or practicing your serve before starting a set. Shoot some baskets or play a quick game of one-on-one with a friend. Practice gets your brain and body to work together while improving your performance.

Staying off the Court When You’re Hurt

If you’ve been injured and you try to come back too soon, you run the great risk of reinjuring yourself – maybe even more seriously than before. Don’t let anyone – including yourself, your parents, your friends, or even your coach – pressure you into playing before your body is fully healed. Your doctor, coach, or trainer will give you specific advice on when you should return to your sport or activity.

Be sure to seek medical treatment whenever you experience:

The same advice goes for a cold or flu virus — don’t play if you’re sick. You won’t be able to concentrate if your head is stuffed up and your nose is running faster than you are, and your lack of concentration can put you at risk for injury. It’s better to wait until you feel better, so you can have a safe season.

The Rules of the Game

Rules and regulations usually exist for a good reason — to keep you and your teammates in the game and to avoid injuries. Do yourself a favor and learn the rules thoroughly — and then follow them. Rules aren’t restrictions. They’re designed to promote safety so that everyone can enjoy the game. For example, a late hit in football after the referee’s whistle has blown leads to a pretty big penalty. This rule is important because a player could be seriously injured if he or she is not expecting a tackle after play has stopped.

Sometimes rules may not be directly related to a sport or activity but need to be followed anyway. For instance, if you’re in-line skating, skateboarding, or riding a bike, pay strict attention to all traffic laws, especially when riding on busy public streets.

Proper techniques also promote safety. This goes for any sport, from motor racing to baseball. Baseball players know not to spike the opposing player who’s covering the bag, even when sliding hard into second base. And when two tennis players rush the net, a nicely angled volley is the correct shot — not a hard smash socked directly at an opponent’s face. “Good players trained by proper coaching seldom show poor form,” Stanwood says. “Proper coaching, and the techniques that go with it, usually prevent unsafe play.” And, of course, practicing regularly will help you to learn the proper technique for any sport you play.

Another example of a safe technique occurs in weight lifting. Weightlifters should take a breath between each repetition. “On any pushing phase of a lift, you want to exhale. So if you’re doing a bench press, let the bar come down to your chest, and if you’re pushing up, breathe out,” Stanwood says. And if you hold your breath? “It really raises your blood pressure, and pressing a lot of weight can lead to a blackout or fainting spell.”  So whether you’re following rules, regulations, or proper techniques, remember that they aren’t there to restrict you — they’re there to keep you safe and injury free.