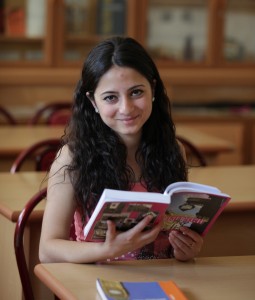 In war-weary Nagorno-Karabagh, AECP doctors have dealt first-hand with a high number of injuries from landmines and other explosives, especially among children.  “A miracle,” said the parents of one victim — a miracle that the AECP Mobile Eye Hospital just happened to be in Karabagh with a team of ophthalmologists on the horrific day two of their children were involved in a tragic landmine accident.

May 3, 2004.  Three o’clock in the afternoon.  Eleven-year-old Albert and his sister, 9-year-old Tsovinar, were playing at a favorite playground for village children — Ttot, or Mulberry Park, in Gishi.  Albert saw something on the ground and picked it up.  Tsovinar immediately recognized the pellet bomb (forbidden by international treaties) and told her brother, “Quickly. Throw it away.”  Albert tossed the bomb, but it didn’t explode, which piqued his curiosity.  Maybe it wasn’t dangerous, he thought.  Deciding to have a closer look, Albert picked up the deadly piece of metal and tried to break it with a stone.  Then, an explosion.  Albert was killed almost instantly and Tsovinar, seriously injured.

Wounded and bleeding, Tsovinar left her dying brother in the field.  Slowly she crawled for help, reaching the fence that separates the field from the highroad.  But, as she climbed over the iron fence, Tsovinar lost consciousness.  One tiny leg caught on the fence.  A passing motorist noticed the small child hanging on the fence and rushed her to the hospital.  Tsovinar was operated on for a ruptured liver and multiple wounds, but the full extent of her injuries was not known until she was able to talk.

A few days after surgery Tsovinar complained about something in her eye.  She needed to see a specialist.  By sheer coincidence, the Mobile Eye Hospital was in Karabagh.  The child, unable to walk, was cradled in her father’s arms as he carried her to a team of waiting doctors on the MEH.

The doctors agreed.  Tsovinar’s injury — a piece of shrapnel precariously imbedded in the corner of her eye — required immediate surgery.  Following travel arrangements made and paid for by the EyeCare Project, Tsovinar and her parents, still reeling from the loss of Albert, made the seven-hour drive to Yerevan where doctors at the Malayan Ophthalmological Center were awaiting her arrival so they could operate and remove the piece of metal, at no cost to the family.

Today, Tsovinar’s eye has healed and her leg is improving with therapy.  Though the family still struggles with the agony of Albert’s death, they consider their daughter’s recovery a miracle.

Dr. Ohanesian, head of the surgical team that operated on Tsovinar, agrees.  “At least we were able to reduce the family’s pain with Tsovinar’s surgery,” he said.  “I will never forget the smile from the child and the gratitude of her parents.  They sustain all of us and make our efforts worthwhile,” said Dr. Ohanesian.

Still, there’s a lot of work to be done. “The sheer pathos that these injuries create cannot be overstated,” Dr. Ohanesian says.  “Scores of children who have been blinded and have lost fingers, legs and hands are seen all over Stepanakert.”

Less than two months after the tragedy, AECP doctors also removed a cataract in Tsovinar’s father’s eye.  Diagnosed when he brought his daughter to the MEH, Ashot didn’t want surgery.

“Today the doctor removed my patch.  It’s hard to think about anything but my child, but I am glad the doctors encouraged me.  I can see now with my both eyes,” he said.

Sadly, AECP physicians often see people in Armenia who accept blindness as their fate.  They are either unaware they suffer from treatable eye disease, or unable to get treatment.  Together we are changing this by making eye care available, especially in the far regions with the MEH, and through public education.