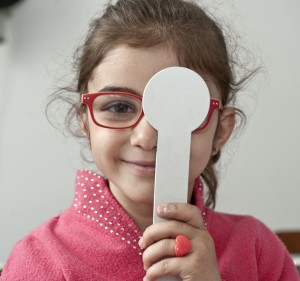 It all started when Mrs. Donna Evans, the wife of former U.S. Ambassador to Armenia John Evans, visited the renowned Armenian Monastery of Sanahin in the Lori region.  A child, playing in the courtyard, caught Mrs. Evans’ attention.  The child was lovely and beautiful and had acute strabismus.  So, at the request of Mrs. Donna Evans, the AECP tried to find and support this child to receive treatment.  During this search other children with strabismus were encountered, some of whom had an opportunity to benefit from the AECP’s services.

In the village of Sanahin, like any other rural area in Armenia, there is a close network among people: everybody knows everybody.  Sanahin School was the best place to look for the child.  As soon as the teachers learned about the story, they started browsing their memories, consulting each other but did not recall any such case in their village.  Finally they suggested the child must have been a tourist and not a resident of their village as Sanahin is visited by thousands of sightseers from all over Armenia and the world.

This could have been the end of the story unless persistent search was continued in the adjacent district called Sanahin-Sarahart.  At the health post the General practitioners cordially agreed to help.  Though the Child doctor was on holiday, she promptly joined the process and came up with a list of children with strabismus.

The AECP promptly made arrangements with Dr. Ruzanna Harutyunyan, Chief of Pediatrics at the Malayan Ophthalomologic Center in Yerevan, to have the eyes of children from Sanahin-Sarahart examined to see if surgical intervention was necessary.  The transportation costs were also covered by the AECP, since many of the families could not afford coming to Yerevan from the far-away region of Lori.

Artur Koloyan is one of the kids who the AECP sponsored to undergo detailed screening at the Malayan Ophthalmological Center.  After the examination it was decided that Artur did not need surgery, and his vision could be corrected through treatment and eyeglasses.

“I understand that regular check-ups are very important to correct and preserve my child’s vision,” Artur’s mother, Hasmik Kirakosyan, said.  “We had visited Malayan Ophthalmological Center five times before, but unfortunately stopped treatment as we could not afford the follow-up.  Now the doctor says Artur has to undergo 10-day treatment, and I am hopeful that an AECP sponsor will support us with this also.”

Gor Danielyan, another child, also has strabismus.  The eye examination revealed that, on top of all, his one eye has lost most of its capacity to see.

“My child is the dearest person to me in the whole world, and his health is what concerns me the most,” Gor’s mother, Naira Danielyan said.  “I am deeply indebted and thankful for this opportunity to have his eyes examined, which I could not afford.”

Vergine Revazyan, only four years old at the time, does not interact with anyone and stands still clutching at her grandmother’s hand.

Dr. Nune Hakobyan, the child ophthalmologist, makes all the effort to have Vergine’s attention to examine her eyes.  Vergine has neurological problems and is referred to the neurologist to see if she can undergo surgery on her eyes.  After the neurologist’s consultation, she has her eyes examined a second time by Dr. Ruzanna Harutyunyan.  The diagnosis?  Her vision can be improved through surgery.

Yura Varosyan, another child, can recite many poems and shows great interest in his older brother’s studies.

In the examination room, he enjoys sharing the images on the chart, but is a bit disappointed when the doctor uses eye drops to enlarge his pupils to examine the eye fundus.  He promises never to come to Yerevan again, but a few minutes later he is fine and gets involved in a game with other kids in the lobby.  The doctor decides Yura’s vision problem can be helped by wearing eyeglasses.  AECP makes sure he gets a pair of glasses on the same day and without charge.

“I am so thankful to AECP,” Nelli Varosyan, Yura’s mother, shares.  “Yura has got the eyeglasses to correct his vision and in three months we will revisit the doctor to discuss the improvement.”

These kids now stand a better chance to improve their vision and the AECP will ensure that they receive the treatment they need — free of charge.  Still, there are many more kids like them, who wait to be helped so they can see all the wonderful colors and shapes around them.