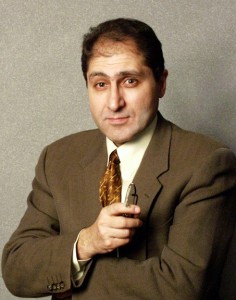 Comparing his first and most recent trips to Armenia, in 1992, he remembers “the long lines of patients desperately wanting to be seen, sometimes hiding around corners or behind doors, there first thing in the morning and still waiting at midnight.”

Returning to Yerevan in 2000, he found that much had improved. “The equipment was superior, the medical staff was better trained and there was relatively consistent electricity and running water instead of a back-up generator or, even worse, a flashlight to illuminate the operating field,” he says. “But many things were still the same, such as the perpetual need and demand for eye care with unending lines, operating through the night, and feeling tired but at the same time feeling refreshed.”

Drs. Sarkis Soukiasian and Roger Ohanesian made their first trip to Armenia together in 1992. Without knowing each other, each doctor was responding to an urgent call from the Armenian Ministry of Health asking for help with those injured in the Nagorno-Karabakh War. While waiting for a connecting flight to Yerevan in a Paris terminal, the doctors met for the first time. Dr. Soukiasian, who has returned to Armenia many times since his first trip, recalls, “We each knew there was another Armenian-American doctor coming from the opposite coast, but we did not know who it was.”

Dr. Soukiasian was returning to his birthplace. As an 8-year-old child, he immigrated to the U.S. from Yerevan with his parents, grandparents and sister. His decision to become a physician was based on his love of science and its human application. He was drawn to eye care because it combined many of the facets of medicine he loved most and because “the surgery was the most elegant I had seen.”

Upon the doctors’ arrival in Yerevan, they immediately went to the Republican Eye Hospital (now the Malayan Ophthalmological Center) and began operating in adjacent rooms. At the same moment Dr. Ohanesian was working on a young girl’s eye, Dr. Soukiasian was meticulously replacing the injured cornea of a teenaged freedom fighter from Nagorno-Karabakh.

In an instant, the soldier’s vision in one eye had been destroyed when a device exploded in his face. The cornea of his remaining eye was seriously traumatized and scarred; to restore his vision, the cornea had to be replaced. Following some kind words to reassure his patient, Dr. Soukiasian went to work and sutured a new cornea — one of several donated corneas he hand-carried from the U.S. — into place with sutures only somewhat larger than a human hair.

During a more recent medical mission to Armenia, Dr. Soukiasian has introduced newer concepts in ocular surgery, including limbal stem cell transplantation. In this surgery, small sections of vital tissue from the edge of the patient’s healthy cornea are transplanted into the unhealthy cornea, revitalizing the abnormal surface and increasing the success rate of future surgeries.
During this same mission, “Dr. S.,” as he’s affectionately known, and a team of AECP physicians visited an orphanage outside of Yerevan — a visit that had a lasting impact on the doctor.
“The hardest thing is seeing sick children with an uncertain future ahead of them,” he explains.

The AECP team examined a number of Armenian children at the orphanage with severe medical problems. For many, this may have been their first — and possibly only — eye exam. The doctors treated the children they could and referred the most serious cases to the Republican Eye Hospital for further evaluations and surgery.

Dr. Soukiasian obtained his medical degree at the Tufts University School of Medicine in Boston and completed residencies with double board certification in internal medicine and ophthalmology. He followed his residencies with clinical and research fellowships in cornea and external diseases and uveitis at the Massachusetts Eye and Ear Infirmary, a teaching affiliate of Harvard Medical School.

Dr. S. and his wife, Linda continue to live on the East Coast and have two children, Deanna and Aram. As a family, they enjoy traveling, especially to Armenia.

Though much of his days are filled with family and medicine, Dr. Soukiasian also finds time to pursue other activities. He is involved in his Armenian community and serves on the Board of Directors of the Sts. Sahag and Mesrob Armenian School in Watertown, Massachusetts, with the hope of providing a meaningful cultural experience to Armenian youth. A true Bostonian, Dr. S. also attends Boston Celtics games whenever possible.

Always a proponent of volunteerism, in addition to his work in Armenia, Dr. S. has also participated in several volunteer missions to El Salvador, where he performed the first corneal transplant in Santa Ana. He is a member of numerous professional societies including the American Academy of Ophthalmology, the Association for Vision and Research in Ophthalmology, the American Uveitis Society and the American Society of Cataract and Refractive Surgery.

He is on the Board of Directors of the Armenian Health Alliance and is a past president of the Armenia American Medical Association. Currently, Dr. Soukiasian is Director of the Vision Correction Center at the Lahey Clinic in Burlington and Associate Clinical Professor at Tufts University School of Medicine.