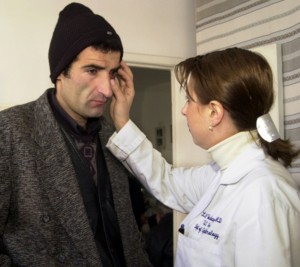 When you ask Lilit Voskanyan which of her many roles – mother, doctor, wife, teacher, daughter, medical chief, friend – she likes best, she responds, “All of them!”

As Chief of Glaucoma Surgery at the Malayan Ophthalmological Center in Yerevan, Dr. Voskanyan sees more than 50 patients a day. In her role as a surgeon, she performs about 15-17 surgeries a week.

“Many people in Armenia, including lots of children, need help because of their glaucoma disease. When you can save their sight, and even restore their vision, that’s great,” says Dr. Voskanyan, describing the rewards of her work.

As Chief of Glaucoma Surgery, one of Dr. Voskanyan’s most important responsibilities is teaching, supervising about 10 doctors in her clinic and holding lectures for over 100 medical students per year. The most rewarding part, she says, is when you see the results — the new doctor becoming more skillful.

Lilit was born in 1964 in Yerevan to father, Albert, a geographer, and mother, Juliet, a climatologist. During her childhood, Dr. Voskanyan dreamed of becoming an ambassador, but her mother hoped she would become a doctor. It turns out, mother knew best.

“I couldn’t have a more rewarding career,” Dr. Voskanyan says, adding that she specialized in ophthalmology because “all my life I liked the optics and optical changes in nature.”

When she was 20, and still in school, Lilit married Karen, a physician who now operates a bread factory. They have two children: son, Spartak, and daughter, Astghik.

Dr. Voskanyan attended the Yerevan State University Medical Facility, 1972-1978, receiving her Diploma of Doctoring with Honors. She did her three-year surgical residency, 1988-1991, receiving a Certificate of Ophthalmologist, with Honors, from the Ordinatura Eye Diseases & Microsurgery Center in Yerevan. Seven years of training followed, from 1991 to 1998, in the Glaucoma Department at the Republican Eye Hospital (now the Malayan Ophthalmological Center.)

In 1999, Dr. Voskyanyan was selected as an AECP-AAMOS Scholar and did a one-year Research Fellowship in the Medical and Surgical Treatment of Glaucoma at the University of California, Irvine, with Dr. Richard Hill, the director. The most important thing Dr. Voskanyan learned while she trained in the United States was “to treat patients very well… and to be attentive.” Most of all, she credits her teacher.

“I learned from Dr. Hill how to teach!” Dr. Voskanyan says. “When your chief and supervisor is very skillful, knows everything you ask him, and is very intelligent, you feel very responsible to everything you got and learned from him. That is great to have a person like him as your teacher and your friend.”

When Dr. Voskanyan isn’t working, she enjoys spending time with her kids, especially talking with them about life. The best thing about being a mother, she says, is seeing her children turn into happy and honest adults.

A woman who fills many roles, Dr. Voskanyan tries to meet all the demands upon her time. “While you can’t do it all, I have fun trying because I love everything I do,” she says enthusiastically.