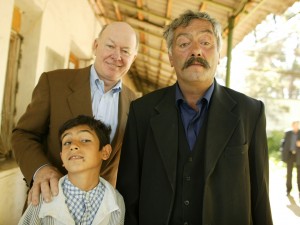 Why would an Irishman visit Armenia? Dr. John Griffin, one of the kindest and most compassionate individuals you will ever meet, makes the world a better place with his generosity of soul. It was Griffin’s long-time friendship with AECP Founder Roger Ohanesian that first inspired him to go to Armenia. It was the Armenian people that brought him back just six months later. He was so impressed by the people on his first surgical mission in October 2003 that he returned the following May for a second “tour of duty” with his daughter Mary.

The two missions that Griffin participated in were each historic for the EyeCare Project. In October 2003, the Mobile Eye Hospital (MEH) made its first trip outside of Yerevan. Griffin himself performed a number of cataract surgeries on the MEH, describing it as a “unique experience.” The May 2004 mission coincided with the arrival of the Mobile Eye Hospital in the Nagorno-Karabagh region for the first time. During their stay in the region, doctors had the opportunity to meet the President of Karabagh and the Minister of Health, who strongly support the AECP’s work throughout Armenia. Griffin explains, the President “was interested in meeting Roger — to see if there’s anything he could do to help.”

Griffin was impressed by the support of the Armenian people and their interest in the MEH. “Large crowds were there to cheer us — the Armenian people are very appreciative of the Project’s work and showed their appreciation with warm hospitality,” he said. John was also delighted that his daughter Mary, then a student studying international relations, was able to accompany him on his second mission so she could see the country and meet so many wonderful people.

“It was a terrific experience for both of us,” he said. “We worked hard all day and at night we went out and participated in the local culture, which included a lot of dancing and a lot of toasting!”

Griffin, born and raised in Dublin, is one of six children. His father, John, worked for Ireland’s Department of Justice. His mother, Kathleen, was a homemaker. Mentored by an English uncle, a general surgeon, Griffin knew at a very early age that he wanted to be a doctor.

Following medical studies in Dublin, Griffin moved to the United States to do a surgical residency at Boston University. “I loved surgery and began as a general surgery resident,” Griffin explains. “But after two years I developed a passion for ophthalmology and changed specialties.” Griffin completed an ophthalmology residency at the University of Rochester, participated in a fellowship at the Massachusetts Eye and Ear Infirmary, and spent two years in Boston doing clinical and research activities in Neuro-Ophthalmology.

Griffin and his wife, Ellen, now live in Syracuse, New York. Together they have raised three children, now adults, Jane, John, and Mary.

“The best thing about being a father is watching your kids grow and evolve,” Griffin says, adding that, though it was difficult to balance being a father and doctor at the same time, it was always important for him to make enough time for his children.

In his private medical practice, Dr. Griffin sees 60-70 patients each day and performs 20-25 cataracts surgeries each week. He says he enjoys the “delicacy of the surgery” and the “ability to restore vision.”

One of his most memorable patients in his private practice was a young woman who was blind in both eyes with severe cataracts — and no insurance. He donated his time and services to her and was able to restore her vision and give her 20/20 sight.

In addition to being a private practitioner, Griffin is also a clinical professor at Upstate Medical University in Syracuse, teaching medical residents there for decades, because he enjoys the “feedback from students.”

During his two missions in Armenia, Dr. Griffin was able to see AECP programs in action and witness the “very, very positive” reactions from patients and local residents toward the AECP and its Mobile Eye Hospital.

Talking of Roger Ohanesian, he says, “Roger packs a big punch… His energy and drive and dedication are impressive.” Dr. Griffin plans to return to Armenia for another medical mission and says he looks forward to another “vivid experience” in the country.