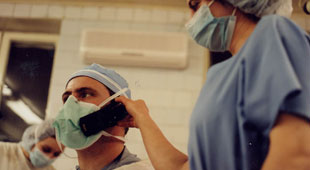 Appreciating the beauty and diversity of the world, Barry Kuppermann is an American by birth with Brazilian parents and a Thai wife. An M.D. and Ph.D., Kuppermann serves as an AECP physician and board member and says he joined AECP out of respect for its mission and the commitment of the organization’s founder, Dr. Roger Ohanesian.

“My parents immigrated to the United States from Brazil, and I am the first of my family to be born in the U.S. I go to Brazil once or twice a year to lecture on retinal diseases, so I was very sensitive to — and impressed by — the depth of Roger’s commitment in providing eye care for people in his ancestral home,” Kuppermann explains.

Although Kuppermann has been consistently named one of the “Best Doctors in America,” he initially wanted to become a scientist. “I was particularly interested in how humans learn at a cellular level through modifications in the connections of brain cells,” he says.

Kuppermann earned a B.S. in biophysics at the University of California-Berkeley and later attended the California Institute of Technology in Pasadena, where he earned a Ph.D. in neuroscience.
“The part of the brain that we know the most about from a nerve cell connection standpoint was the visual part of the brain,” he explains. “So, at Cal Tech, I became a vision researcher so that I could study how we ‘learn’ how to see.”

Because Kuppermann’s research began to have important implications for clinical ophthalmology, he decided to attend medical school after completing his Ph.D. and pursue an academic career in ophthalmology and vision research.

In 1992, Kuppermann became the Chief of Retina Service for the Department of Ophthalmology at the University of California-Irvine. Three years later, he traveled to Armenia with Dr. Ohanesian.

“It was clear to me at that time that to provide significant and effective retina care, visits once or twice a year would be inadequate as the retina doesn’t ‘keep’ the way that cataracts usually do and glaucoma frequently does,” he explained.

So, Kuppermann arranged for an Armenian ophthalmologist, Armen Vartanian, to attend UCI for one year as a clinical and surgical fellow. By the end of the fellowship, Kupperman says that Armen was fully trained in modern Western retinal philosophy and methodology, both clinically and surgically.

He also describes a particularly successful AECP operation involving a patient flown to UCI from Yerevan.

“I performed an exhaustive 6-8 hour surgery, which took [the patient] from near total blindness to functional vision,” Kuppermann says. “She was a juvenile diabetic… but it amazed me that someone could have such severe diabetic retinopathy that it would take eight hours of surgery to repair… which is the single longest surgery of my career.” A typical surgery, he adds, is usually one to two hours and sometimes three hours for a severe case.

Despite a crowded professional schedule, Dr. Kuppermann makes time to serve on the AECP Board of Directors and as an AECP physician. He finds the latter role especially rewarding.

“As a university-based physician, I have committed my career to teaching as well as participating in the all-important network of providing care to our local patients in need — both those with and without financial means,” he explains. “Being an AECP physician is an extension of that same philosophy.”

One patient whom Kuppermann examined during his 1995 trip to Armenia even moved to Los Angeles just so the doctor could treat him.

“He had a complicated condition called Behcet’s Disease, which had blinded one of his eyes in Armenia by the time he was 15. Suddenly, one day, a year or so after the examination in Armenia, he called to let me know that he had moved to Hollywood with his mother and sister to be treated by me,” Kuppermann explains. “He would come down from Hollywood to Orange County once or twice a month for his care. With continued monitoring and care of his eye disease, he maintained 20/20 vision in his remaining eye for five years or so until he died of neurological complications of his disease.”

Despite the long hours spent helping patients, Kuppermann, who lives in Laguna Beach, spends his spare time with wife, Jantana, and sons Jacob and Ethan. He enjoys “simple adventures” with his kids, including trips to the beach, library, and museums. Travel remains a “big focal point” in Kuppermann’s life and he enjoys “sharing the world” with his family.

Kuppermann has a “fundamental gratitude” in his approach to life as he spends his day treating people with significant vision problems in their life.

“As long as I have the love of my family and reasonable health, I’m satisfied,” Dr. Kuppermann says. “I feel fortunate to be able to do something so meaningful with my life, be paid enough to do it that I am able to put a roof over my family’s head, and still have time and money left over for fun adventures all over the world with my wife and children.”