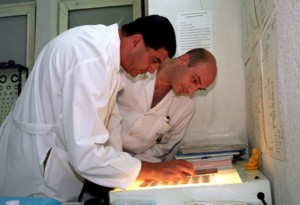 Armen Vardanyan, the Armenian EyeCare Project’s (AECP) very first Fellow, views his selection as “both a great honor and a big responsibility.” Chosen in 1996 as the first AECP-AAMSOC (Armenian American Medical Society of California) Scholars participant, Armen studied with Dr. Barry Kuppermann at the University of California, Irvine (UCI.)

Armen says he learned a lot from Dr. Kuppermann, mentioning the combination of theoretical knowledge with practical skills as just one of the lessons learned from his mentor.

“He is a celebrity in the sphere of ophthalmology,” Dr. Vardanyan says of his teacher. “He believes in his Fellows and gives them more freedom. This is a greater responsibility, but at the same time, it makes one concentrate on all the skills, inquisitiveness and creativity it takes to be a great doctor.”

Returning to Armenia after his one-year fellowship, Armen began to place a high value on using his experience abroad to help those in need. He returned home eager to use his newly acquired knowledge to bring sight to the people of Armenia.

As Director of the AECP Retina Clinic, Armen now examines about 20 patients a day and conducts around 12-15 surgeries — including cataract, extraction, vitrectomy, and sclera buckle — on a weekly basis. Serving with two other AECP scholars, Drs. Lilit Voskanyan and Anna Hovakimyan, together, these doctors strive to bring specialty medical care, on par with the U.S., to Armenia.

An important part of this process, Dr. Vardanyan says, is teaching. “I teach doctors and clinical residents who work in my clinic every single day,” he says. “…I enjoy the opportunity to transfer my skills to other people, then watch them progress and know that it is partially due to my efforts.”

He also says the opportunities that the AECP has provided have been extraordinarily impactful.

“The AECP has developed and advanced ophthalmology in a number of ways — surgical and medical advancement, education and research,” Dr. Vardanyan says. “They made it possible for Armenian physicians to travel to the U.S., learn surgeries and come back to teach and practice innovative eye care. People from abroad — Iran, Syria, and Russia — even come here to get treatment now that we have the knowledge and the expertise. It is greatly due to AECP’s contribution.”

Dr. Vardanyan says he decided to become a doctor at a young age: “It seems I began my practice in childhood. When I was just six years old, I treated all the dogs and cats in the neighborhood. Later, I was influenced by the professional choice of my parents.” Armen comes from a family of doctors — both parents, two sisters, and a brother-in-law.

Continuing the family tradition, Armen married his wife, Nona, and after graduating from The Medical Institute’s pharmaceutical branch, she, too, became a doctor. Their two children, a son and daughter, are also in the medical field.

The decision to focus on ophthalmology and, in particular, the retina came years later, during Vardanyan’s time in medical school and during his training.

“I believe that eyesight is one of the most important things in life,” Dr. Vardanyan says. He also elaborates on his decision to work in the retina field: “I think it is the most difficult sphere in ophthalmology and the neediest specialty in my country. There are not many retina surgeons, but there are many patients in need of retina treatment and surgery.”

As for what he likes most about being a doctor, it’s quite simple: “The possibility to help people,” Dr. Vardanyan says. “To help a hopeless person with the worst complications by bringing back his vision is the most challenging and interesting occurrence.”