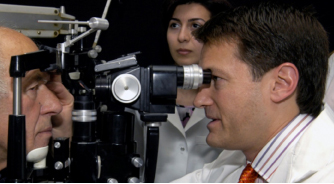 An Assistant Professor of Ophthalmology, Aldave is a full-time faculty member of the UCLA Jules Stein Institute, spending about 70 percent of his time in direct patient care and 30 percent in research activities.

Beyond his faculty responsibilities, Dr. Aldave serves as Director of the Cornea & External Disease Fellowship Program, Director of the Jules Stein Eye Institute Eye Bank, and Interim Director of the Vision Genetics Center. His awards and honors — too numerous to list them all — include a 2000-2001 Heed Ophthalmic Foundation Fellowship, a 2001-2002 American Ophthalmological Society-Knapp Testimonial Fund Fellowship and the 2001 Claes Dohlman Society Award given to the top Cornea and Refractive Surgery Fellow in the country.

Driven by his unwavering commitment to his patients, this accomplished and highly respected ophthalmologist defines success as a doctor as being able to offer his patients “more” — better skills, newer technologies, deeper caring and greater hope.

Born in Eugene, Oregon and raised in Austin, Texas, Dr. Aldave showed an early interest in both medicine and the law, though medicine eventually won. As a medical student at the University of Texas Medical Branch at Galveston — he graduated first in his class in 1996 — Dr. Aldave had the opportunity to observe ophthalmologic surgery and was drawn to the intensity and “precision” involved in working with the human eye.

“It’s a specialty where compulsive personalities are rewarded,” he explains.

Searching for a way to give “more” to patients who had multiple failed cornea transplants, Dr. Aldave looked to artificial cornea implantation as an option. In 2003, he performed America’s second implantation of an Australia-developed AlphaCor artificial cornea. At the Malayan Ophthalmological Center (MOC) in Yerevan, he performed the one-to-two-hour procedure using the FDA-approved Boston Keratoprothesis, developed by Dr. Claes Dohlman of the Massachusetts Eye and Ear Infirmary.

Prior to his trip to Armenia, Dr. Aldave went to Mexico on a medical mission in 1997. In Mexico, he was discouraged by their limited ability to affect change due to the conditions of the facilities and lack of follow-up care. “Armenia is different,” says Dr. Aldave. Comparing the state of ophthalmic care in Armenia to other underdeveloped countries, he states that Armenia is in the unique position of having adequate equipment and many well-trained doctors while still needing help from abroad. He experienced “compelling contradictions” in Armenia — remnants of communism colored with Western influence. He gives the example of operating at the MOC, where state-of-the-art equipment and instruments — donated by the AECP — are available, while disposable surgical gowns and drapes, taken for granted in the United States, are not.

Dr. Aldave performed Armenia’s first artificial cornea implant on Seiran Asatryan, an automotive mechanic from Baku, Azerbaijan, who was blinded back in 1992 by an explosion during the Karabagh War. Seiran regards the day he was injured “and all the other days that followed” as the most difficult of his life. He previously had operations for retinal detachment and cataracts in the U.S. and in England, along with two unsuccessful cornea transplants. After the failed transplants, Seiran was cautiously optimistic about the artificial cornea. “The doctors tell me that this time it is something completely revolutionary…” he said. “We’ll see.”

In addition to performing the country’s first artificial cornea implant, Dr. Aldave also taught Armenian doctor Anna Hovakimyan to perform the procedure on her own. The two doctors already knew each other; they had trained together in 2000 as Fellows — Dr. Hovakimyan’s Fellowship sponsored by the AECP — at the prestigious Proctor Foundation at the University of California, San Francisco. Dr. Aldave had confidence in Dr. Hovakimyan’s professional skills and knew the patients would receive superior follow-up care after he returned home.

Hours after Seiran’s operation, Gagik Tovmasyan received the second Boston Keratoprothesis that had been hand-carried from the U.S. Gagik was a welder like his father and older brother, but in 1995, was injured on the job when a carbide cylinder broke open and the gas burned his cornea. Two cornea transplants in his right eye resulted in temporary improvement in his vision — then blindness and great disappointment. He regards the artificial cornea as his opportunity to work again and support his family.

In the days following his surgery, Gagik was overcome with feelings of joy. Seeing vague images, he exclaimed, “After so many years of darkness, I can see my wife!” Several weeks later, he was able to read two lines on the eye chart.

Seiran’s case was more complicated, due to retinal scarring from the explosion, but he has light perception in his eye and may see again after undergoing another retinal surgery.

The patients expressed their gratitude to the American and Armenian doctors. “The feeling that people who do not know me are not at all indifferent to my fate builds my confidence in my future and strengthens my will to fight and help them help me,” said Gagik.

“Just there to help,” Dr. Aldave enjoyed the “overwhelming hospitality of the Armenian people” and the chance to practice pure medicine. He says he looks forward to returning to Armenia on a future AECP Medical Mission when there is an opportunity for him to make another unique contribution.

The AECP medical team left three Boston Keratoprotheses in Armenia, and because of Dr. Aldave’s initiative, Armenians with the most severe cornea damage will be given artificial cornea implants — and hope for restored vision.