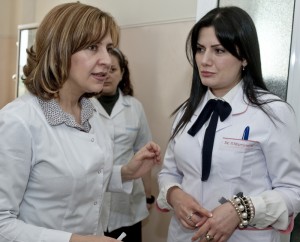 Anna Hovakimyan, Chief of the Corneal-Uveitis Clinic at the Malayan Ophthalmologic Center in Yerevan, Armenia, encounters the same challenges as other working mothers worldwide. How does she balance her roles as mother, wife and physician? “With great difficulty,” Dr. Hovakimyan says. Though her days are always filled with conflicting demands upon her time, she responds to all who need her with kindness and grace.

Along with her demanding medical career, Anna and her husband, Hayk, Chief of Orthopedics and Sports Trauma at St. Nerses the Great Hospital in Yerevan, are parents to two sons, Arik and Arsen, and, as of recently, a baby daughter.

Hovakimyan’s three kids are always happy to see her walk through the door after a long day, but when she’s not at home, this hard-working ophthalmologist is busy running an entire clinic at the Malayan Ophthalmological Center, seeing anywhere from 30 to 100 patients a day, performing complicated eye surgeries on about 1,000 patients each year and supervising more than 50 residents and doctors.

Hovakimyan received her Diploma of Doctoring with Honors from Yerevan State Medical University in 1993. A two-year residency in eye diseases and microsurgery at the Clinical Ordinatura followed. In 1995, she received a Certificate of Ophthalmologist with Honors, and after another three years of training, she received her License Surgeon in Ophthalmology and Microsurgery in 1998.

During their medical missions to Armenia, Roger Ohanesian and other AECP physicians recognized Dr. Hovakimyan’s significant medical talents, and in 1999, selected her as an AECP-AAMSOC Scholar. She was awarded a one-year fellowship at the prestigious UCSF Proctor Foundation in San Francisco, California.

Dr. Hovakimyan, along with the first two Scholars, Drs. Lilit Voskanyan and Armen Vardanyan, have since returned to Armenia to establish specialty clinics at the Malayan Ophthalmological Center and deliver outstanding medical care, on par with U.S. standards.

In fact, the physicians and clinics at the Malayan Center attract patients from the outlying regions in Armenia and adjacent countries. Some of the most difficult ophthalmology cases are referred to these clinics, reversing the decade-long trend of sending Armenian patients abroad for ophthalmologic care and surgery.

“Before my training in the U.S., there were cases where we were saying ‘Well, you have to go to Moscow.’ That’s where we were sending patients,” Dr. Hovakimyan says. “But now, we have many patients visiting from Russia to get my opinion… or another doctor’s opinion whom we have here… Maybe 10-12 people visited from Russia in the last few months. And, you know, there are Russians, there are Georgians, there are Armenians living in Russia so we get referrals from the regions around us, which is really nice because now you don’t need to send anybody abroad.”

Dr. Hovakimyan attributes this regional role reversal to the high level of medical training she and fellow doctors received while studying abroad.