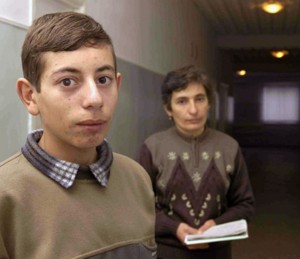 Manya Sargsyan was cleaning up after dinner one evening in 2004 when a “horrible blow” shook the adjacent room, leaving her 15-year-old son Pavel covered in blood and screaming.  A minute before, she had noticed her son sitting on the sofa playing with a flashlight — but that flashlight turned out to be an electrical detonator.

Sargsyan grabbed her son and rushed him to the nearest hospital where he underwent surgery to stop the profuse bleeding from his abdomen.  It wasn’t until later, when Pavel was recovering from the operation, that he realized there was something wrong with his vision.  The explosion had left a tiny piece of shrapnel and a traumatic cataract in his right eye.

Local doctors told Sargsyan that Pavel’s sight could only be saved if they traveled from their home in Mashkalashen Village, in the Nagoro-Karabagh Republic, to Yerevan for an operation that would cost hundreds of dollars.  Sargsyan and her four children live on her widow’s pension of $60 per month, and they did not have the means to get to Armenia’s capital, much less pay for the operation.

“I lost my husband to a mine,” Sargsyan lamented, “I wish I could have recognized the object.”  Sargsyan’s husband was killed a decade prior in a mine explosion after being involved with regional fighting for seven years.  Manya and Pavel had little hope of finding a way to Yerevan.  They could not have guessed that a concerned traveler, an American foundation, and two international nonprofits would hear Pavel’s story and join resources to save his sight.

Ian Gaham Leask, a Briton living in the U.S., first became aware of Armenia when he helped a Diasporian write a book about his ancestral family.  As he learned more about Armenia’s history, he became impressed with the way Karabaghi Armenians “stood up for themselves,” especially under what at first looked like impossible odds.

He decided he had to visit Karabagh to fully comprehend it, so he bought a ticket and traveled to the region in 2004.

Upon his arrival, Leask met with The HALO Trust, a British organization dedicated to clearing landmines and unexploded ordnance from post-conflict countries around the world.  Last year alone, HALO removed over 1,000 anti-personnel and anti-tank mines in the Nagorno-Karabagh region.  Leask toured the area with the organization and witnessed first-hand the devastation of mine accidents.  One of the places he visited was the home of Pavel and his mother.  Through a translator, Leask spoke extensively with the family.

“I felt their great will to survive and saw a picture of the boy’s father,” he remembers.  “You could see the resemblance.”  Leask left the Sargsyan’s home yearning to help.

Upon returning to the U.S., Leask contacted Lou Ann Matossian, program officer at the Cafesjian Family Foundation, a philanthropic organization focused on U.S.-Armenia relations.  Touched by Pavel’s story, Matossian remembered the Armenian EyeCare Project and called its offices in California in hopes of offering assistance to the boy and his family.

Dedicated to eliminating preventable blindness in Armenia, the AECP often responds to direct requests from the Diaspora to facilitate ophthalmologic treatment for Armenians in need of care.  Upon hearing of Pavel’s desperate situation, AECP President Dr. Roger Ohanesian immediately offered his organization’s support and resources.  The AECP office in Yerevan worked with The HALO Trust to bring Pavel and his mother to Yerevan as soon as possible.

Once at the Malayan Ophthalmological Center, Chief Ophthalmologist Dr. Alex Malayan removed the piece of shrapnel from Pavel’s eye, extracted the cataract and implanted an intraocular lens.  Everyone involved was relieved to hear that Pavel had received treatment in time, and that the vision in his injured eye had been restored to 20/20.

“I have no words to express my feelings,” Pavel’s mother said.  “Everyone has been so kind to us… so considerate.”

Transportation, lodging, food and medical treatment were provided at no cost to the Sargsyan family.  The total cost to save Pavel’s sight was around $500, reasonable by U.S. standards, but completely inaccessible to a family that receives only $60 each month.

Dr. Ohanesian was pleased with the speed at which everyone responded.  “When you look at the circuitous way that we heard about this case, it really makes you marvel,” he said.  “We have a system in place to react to serious eye diseases quickly and get patients to the appropriate doctor for immediate treatment.  This gives the patient the best chances for a successful outcome.”

Gerard Cafesjian, Founding President and CEO of the Cafesjian Family Foundation, sees this success as the first of many.

“Our involvement in this case came about in the first place because a caring individual, with no personal or family ties to Karabagh, started building a chain of support,” he said.  “But it has also deepened the connection between two valuable organizations, HALO and the AECP, which may ultimately benefit a large number of people.”

After hearing about Pavel’s remarkable recovery, Leask said, “I can’t praise the Armenian community enough in the way it gathers around and attends to a problem.”

He has not spoken with the boy or his mother since the day he first met them in their home in Karabakh, and he says he doesn’t need to.  “They know what’s in my heart,” he explains, “…and I know what’s in theirs.”