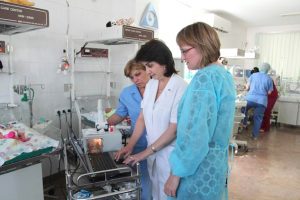 In partnership with USAID and the Children’s Hospital of Los Angeles, the EyeCare Project, through its Center of Excellence for the Prevention of Childhood Blindness, developed a training program for neonatal nurses in 2014.

Neonatal Intensive Care Unit Nurses are highly-trained primary care givers in the Intensive Care Units for infants. They provide care, monitor the vital signs of newborns, assist physicians, handle sophisticated equipment while performing their duties and provide first response in case of emergencies. NICU nurses must have current knowledge of infant care and be highly skilled in providing quality care for prematurely born, underweight and/or severely sick babies during the first critically fragile stage of their lives. 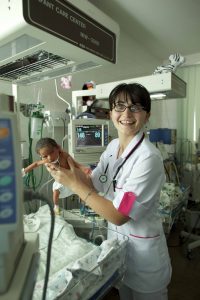 The EyeCare Project, in conjunction with the CHLA neonatal intensive care staff, developed the first online courses in Armenia — on any medical topic —on the key themes of neonatal nursing care. As a pilot project, the online courses became available for two main Neonatal Intensive Care units (NICU) in Yerevan. Participants received pre- and post-tests to evaluate the effectiveness of the program and to test their knowledge and skills.

The pilot project was very successful and there was a large demand for the Neonatal Intensive Care online courses. As a result, the Armenian Association of Neonatal Medicine replicated the project for other NICUs throughout Armenia.
Overall, 11 courses on eight topics were prepared and 142 NICU nurses were trained from 2014-2017.