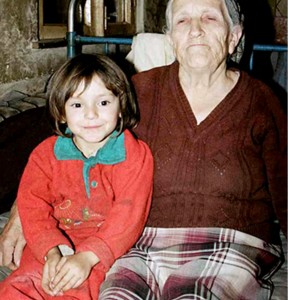 Lucik Yeritsyan lives with her family in a house on the outskirts of Artsvaberd, a small village in the Tavush marz, which has about 3,000 residents.  The house has one living room, one bedroom, a kitchen and a corridor, where Lucik lives.  The wooden stove is in the corridor next to Lucik’s bed.

In the one-bedroom house — with a small orchard, a vegetable plot and a few sheep and hens — eight others live with Lucik. They include her husband, Armen; son and daughter-in-law Ashot and Maro; and five grandchildren.

No one in the family is employed.  The family lives off their land and Lucik and Armen’s pension — the equivalent of about eight dollars a month each.  While continuing economic hardship has left more than 50 percent of Armenians poverty-stricken and without access to health care, according to Armenia’s Paros scale for poverty, the Yeritsyan family is not among them — just as 80 percent of their village is not. Tavush has one of the lowest poverty rates in Armenia, at 42 percent.

Lucik, like so many Armenians, suffered from preventable blindness.  She was blind in both eyes from cataracts, a condition that rarely results in blindness in the U.S. because it is almost always detected early and treated before the patient loses their sight.

Blind in one eye for four years and both eyes for more than two, Lucik keeps track of how many days — or weeks or months or years — she hasn’t been able to see, with a calendar.

“It’s been 2 years and 1 month since I have not seen with both my eyes,” she says.  “I have to reduce my movements.  I have to spend most of my time indoors because I don’t see.”

Lucik was first seen by a doctor when the Mobile Eye Hospital visited her village for eye screenings and treatment, made possible through the “Adopt-a-Village” program and a generous contribution from Ms. Dickie Hovsepian, an Armenian American from San Francisco who sponsored care for residents in the remote villages of Tavush.  As soon as Lucik was seen and her blindness diagnosed, she was scheduled for two surgeries, one in each eye, nine days between.  After her first surgery she began counting the “days of light” on her calendar.

When doctors told Lucik they would be able to restore her sight with surgery, at first, she was skeptical.  While in bed near the wooden stove, her grandchild asked about her eyes, wondering if Granny will be able to see again.  “I don’t believe I can see again,” Lucik responded.  “Well, the doctors say I will.