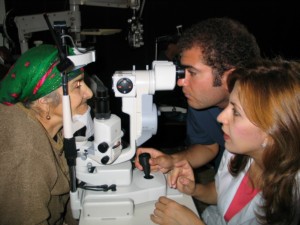 Shant Korkigian, a graduate of Michigan State University’s Medical School, never thought medicine would be his calling. While one might think that following in his father’s footsteps — a successful physician — would be the obvious choice, Shant was hesitant about joining his family’s line of work.

“I wanted to make my own career selection,” he said. “I did not want it to be predestined or a field that was pre-determined by my parents.”

But Korkigian, now a young doctor, says he inevitably chose medicine as his career — a decision he made on his own.

“I made the decision to go into the field of medicine only after a number of experiences led me in that direction,” he said. “I realized that helping people as a physician was something that I really wanted to do for a lifetime.”

Some of those experiences included Korkigian’s volunteer work in Armenia, his motherland. He began volunteering in Armenia in 2004, and, a couple years later, had the opportunity to participate in an AECP Observership for medical students. AECP’s specialized ophthalmology program in a developing country was an excellent and exciting opportunity for Korkigian. The experience provided him with a variety of basic ophthalmology skills and knowledge and he was able to see pathology and eye conditions that he would never have the opportunity to see in the United States.

“The amount of serious pathologies in Armenia is linked to the lack of appropriate primary health care and timely screening for the population, especially in the rural areas, resulting in extreme cases,” Korkigian said. “Seeing those patients was like a classic text book example of what could happen if the treatment is not provided on time.”

During his trip to Armenia in 2004, Korkigian traveled extensively throughout the country and volunteered at a number of medical NGOs and hospitals throughout the nation’s regions. It was during this first trip that he heard about the Armenian EyeCare Project for the first time and became interested in ophthalmology as a potential field to study.

In August 2006, Korkigian returned to Armenia, this time for an Observership with the EyeCare Project. Korkigian says he felt privileged to work with AECP doctors during this time and mentioned the Mobile Eye Hospital’s (MEH) two-day mission to Nagorno-Karabakh as a high point.

“The time I spent with the AECP doctors was an extraordinary observational experience,” Korkigian said. “The dedication of the doctors, their high professionalism, combined with the wide spectrum of pathology I was able to observe during my trip, gave me a great deal of knowledge.”

Korkigian joined the AECP mission, observing surgeries on the Mobile Eye Hospital and participating in screenings conducted on the MEH and in the villages of Sushi and Berdadzor. He says he was particularly impressed that AECP doctors were able to see 200 patients from Nagorno-Karabakh in just two days.

“The fact that the doctors were working in difficult field conditions and yet were able to provide the best possible care was very impressive,” Korkigian says. “It made me very proud to be part of the team.”

Ambitious and enthusiastic, Korkigian worked hard while in Armenia to pack in as many experiences during his short trip as he could. He did research work at the AECP Yerevan office and also visited a number of sub-specialty clinics to work with AECP fellows, who have all trained in the U.S. He spent the most time with Dr. Anna Hovakimyan, Chief of Corneal-Uveitis and Dr. Lilit Voskanyan, Chief of Glaucoma, at the Malayan Ophthalmological Center (MOC.) Korkigian also worked with Dr. Lilit Mkrtchyan, Chief of the Low Vision Clinic at MOC.

“I enjoyed working with them and I really appreciated their hospitality and willingness to share their experiences with me,” Korkigian said.

After his observership, Korkigian shared his plans to return to Armenia as a practicing physician, so he can contribute to the improvement of eye care in the country with his skills, understanding and new techniques.

“Right now I am taking a lot more than I am giving,” Korkigian said.  “But I do hope to come back to Armenia as a physician to help my people.”

As his time in Armenia came to an end, the young medical student was asked what his hopes are for his homeland.

“My wish for Armenia and her people is that the country continues to grow so the people can overcome the social and economic difficulties they are now facing,” he responded. “And for the EyeCare Project…” he elaborated. “My wish is that the organization continues to work for the benefit of the Armenian people giving the gift of sight to thousands across the country — and that someday I can come back and contribute to their mission."