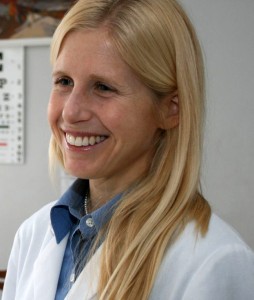 In 2010, Dana Hornbeak, then a medical student specializing in ophthalmology at Duke University, volunteered to spend time in an unlikely place, Armenia, as part of a Medical Observership with the AECP.

As an Observer, Hornbeak spent her month in the country watching and learning at all of the AECP’s facilities, including the Mobile Eye Hospital, Education Center, Diagnostic Center and Subspecialty Clinics. She worked at the side of Armenian and U.S. physicians alike, intently watching as they cared for patients.

Born and raised in Laguna Beach, California, Hornbeak not only received exceptional grades throughout college, but by medical school, she had already been published in several medical journals, volunteered in a handful of foreign countries, and received several fellowships and scholarships recognizing her leadership abilities.

In addition to her Observership in Armenia, Hornbeak also received a Fulbright Fellowship, from 2008-2009, from the U.S. State Department for ophthalmology research and an ambassadorship in Singapore.

After her AECP Observership in 2010, Hornbeak completed her ophthalmology residency at University of Pennsylvania’s Scheie Eye Institute, calling her time in Armenia a “fantastic educational opportunity” and mentioning “learning from experienced Armenian ophthalmologists, seeing ocular pathologies and practicing examination skills” as highlights.

Hornbeak explains her choice of being a doctor, saying, “Medicine uniquely offered the combination of intellectual challenge and the ability to tangibly help people, a combination I continue to enjoy.”

She calls medicine a calling, adding that she follows her principles by endeavoring to give back to the community through volunteer work.

“A good doctor should have compassion, a strong work ethic, integrity, level-headedness, humility, and a desire to learn,” she says.

You can read Dana Hornbeak’s own account of her unique experience in Armenia. Written by Hornbeak herself, her story details many of the dramas and medical miracles she witnessed on a daily basis through her work with the Armenian EyeCare Project. Read her story here.

Notes from the field: The Armenian EyeCare Project

Malayan Ophthalmological Center: Yerevan, Armenia, February 2010. I see Grigor’s calloused, weathered hands before his eyes: farmer’s hands, as stoic and tough as he is. His eyes are a bewitching clear hazel — a cross between Middle Eastern and European — manifesting the hundreds of years of cultural mixing that typify this crossroads. I wonder what those eyes have seen in the past turbulent decades.

Smiling through gapped teeth and wrinkled dimples, he hands a small white paper to the ophthalmologist and sits down for a refraction reading. I glance at the slip: The label “Armenian EyeCare Project” (AECP) stands out amidst the Armenian characters. I learn that Grigor is from a rural village several hours north of Yerevan, and was seen by one of the AECP’s regional eye screenings. Diagnosed with a dense cataract, he came to the Malayan Ophthalmological Center (MOC) for surgery — all paid for by the Armenian EyeCare Project. He now returns for a post-operative checkup — excellent outcome, no complications — and will return to his farm tomorrow. For Grigor, as for countless other patients, his “Armenian brothers in America” are restoring his vision. Restored vision in turn means restored livelihood, as all farm, factory, and household activities rely on adequate eyesight.

Even in the capital city of Yerevan, the wealthiest part of Armenia, wide tree-lined boulevards belie a second reality in the side streets: dilapidated Soviet buildings, exposed electrical wires, rusted metal doorways and balconies, pot-holed dirt alleys, and small corrugated tin-roof shacks. Elite designer clothes and upscale cars juxtapose with the grim prospects of the working-class clerks handing them their groceries. It is a stark and humbling disparity.

Due to poverty, isolation of countryside villages, or both, patients often present to AECP screenings or to the Malayan Ophthalmological Center with advanced disease. My first day in the admitting and triage clinic, for example, included a fulminant case of preseptal cellulitis, a 15-year-old boy with untreated low vision since a penetrating eye injury at age six, and a cataract visible from across the room — the most severe cataract I have ever seen.

As Dr. Ohanesian says, “In the U.S. there are cataracts, but here there are cataracts.” These patients come to the Malayan Ophthalmological Center because it is considered the leader in ophthalmologic care in the country — a rank largely due to the partnership with the Armenian EyeCare Project, including donated equipment and professional collaboration.

In rural regions, it is much more difficult to obtain eye care. Most families are subsistence farmers in the countryside or in remote villages, eking out a living by working the land. In rural factory and mining towns, unemployment and poverty have led an entire generation to emigrate to Yerevan or overseas. These families usually do not have access to medical care, much less ophthalmologic care. Even if they have money for an eye checkup, there are usually no ophthalmologic specialists in their region, and only rudimentary surgical facilities. The AECP’s Mobile Eye Hospital comes here: to the most remote, under-resourced areas, and to the individuals who would otherwise have no opportunity to regain their lost eyesight.

My month and a half in Yerevan is both clinically and organizationally interesting. Clinically, as a fourth-year Duke medical student soon to start my ophthalmology residency at the University of Pennsylvania, it is a fantastic educational opportunity: learning from experienced Armenian ophthalmologists, seeing complex ocular pathologies, and practicing examination skills. Organizationally, it has been a case-study of the Armenian EyeCare Project, drawing on my background of a Master of Public Health (MPH) and undergraduate Honors Thesis. For my undergraduate thesis, I analyzed the organizational structure of a health care-related NGO in the Peruvian Amazon.

The result of my two months of field research – identification of several key factors for organizational success – now gives me a framework for evaluating the Armenian EyeCare Project.

Despite the cultural differences and 10,000-plus miles separating them, many of the markers of the Amazon NGO’s success are visible in the AECP. These include strong collaboration with local professionals, a committed core leadership group, positive relations with the local community, sustainable education programs, responsiveness to changing health needs and provision of necessary equipment. To these, the Project has added research, which promotes long-term academic involvement with the local medical university.

The Project provides immediate eye care through year-round rural eye screenings and Mobile Eye Hospital surgeries. The Project also builds the capacity of the Malayan Ophthalmological Center by supplying much-needed diagnostic and surgical equipment. Indeed, the majority of the Center’s equipment has been supplied by AECP and bears the AECP label.

Focused on “teaching a man to fish” in addition to providing immediate assistance, the Project invests in the future through patient education and physician training. Throughout the year, AECP-funded doctors travel to rural regions of Armenia for several weeks at a time. There they do eye screenings for children and adults; run educational programs with local ophthalmologists and primary care physicians, including giving them a helpful 200-page “Essentials of Ophthalmology” manual; educate patients with a host of informative brochures; and assist patients in reaching regional surgical centers.

For complex pathologies that cannot be treated locally, the Armenian EyeCare Project funds patients’ surgery at the Malayan Ophthalmological Center. These individuals — people like Grigor, young, old, male, female, factory worker, farmer — would never have received an eye screening, much less sight-giving surgery. Finally, all patient visits are recorded in a database, allowing for valuable research on ocular disease prevalence and treatment outcomes.

The Armenian EyeCare Project is well-known and well-liked by the local community, both in Yerevan and in rural Armenia. For instance, the U.S. Embassy in Yerevan uses it as an example of how the U.S. Diaspora is giving back to Armenia, currently displaying a photo of the Armenian EyeCare Project on its front gate. “Even in rural regions,” notes a MOC ophthalmologist, “every ophthalmologist in Armenia knows about the Project.” Unlike many American or European NGOs elsewhere which have engendered competition among local partners, the Armenian EyeCare Project works alongside — completely integrated with — local physicians, nurses, and health leaders. As a result, its catchment area extends throughout the country, something that few health-related networks have been able to accomplish. It is no surprise, then, that I first found out about the U.S. Diaspora from an Armenian in Yerevan. I have lived my entire life in California, but it wasn’t until coming to Yerevan that I understood the significance of the Diaspora in California and the U.S. “Oh, you are from California? As in, Glendale? Yes, we know America: many of our Armenian brothers and sisters are there.”

A worldwide Armenian “family” isn’t far from the truth. If people make a nation, the majority of “Armenia” actually lives outside its borders: more than eight million, as compared to some 3.2 million within Armenia. Organizations like the Armenian EyeCare Project help to unite this territorially diverse group, successfully blurring the lines between Armenian and Armenian-American. Indeed, judging from Grigor’s smile and newly restored vision, national boundaries just don’t seem to apply.