A Time for Strength, Kindness and Understanding 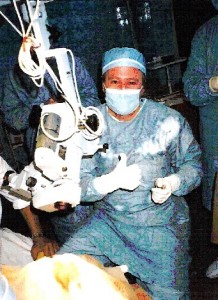 We arrive at the airport many hours before the flight out of Armenia. A snow-capped Mt. Ararat is bathed in pastels by the rising sun. Steam from my breath hangs in the still morning air. It is only “cool” now, but the warmth from my friends easily pushes aside the chill of the early morning. I hope the oncoming winter is not too unkind to the friends I am leaving behind. Finished are the throngs of patients and surgeries into the night and I am savoring a sense of satisfaction as we wait for the plane. I am guided through the undecipherable mysteries of the airport ablutions and I am grateful for my friends’ experience in these matters. After the hugs and heartfelt goodbyes, the same set of potholes in the runway greets the Airbus. Gone, (thank God) is the Tupelov 154 with its cabin reeking of jet fuel and its annoying habit of decompressing at 38,000 feet. It’s a situation fixed surprisingly easily by pouring a can of Sprite

over the leaking area, creating an instant ice gasket! The thunk of the retracting landing gear punctuates the fact that I am leaving Armenia again. As the flow of adrenaline starts to ebb, I push aside my anger at things not right in our world. It is not a time for anger; it is a time for strength, kindness and understanding. It is not a time for the wringing of hands; it is a time to use those hands for whatever can be done. With that thought, I start planning the next trip and things to be done. I notice a warm feeling enveloping me and oddly miss the Tupelov as I am not able to kick over the seat in front of me. I realize that it is useless to resist sleep any longer and surrender to what Roger Ohanesian calls the “sleep of the just after.”

When people hear this story, they often question Dr. Hill about why he so readily agreed to fly to Armenia on a moment’s notice. “I can tell you there is no thought,” Dr. Hill responds. “Only a feeling of what must be done.”

While pursuing a variety of activities and balancing his energetic family life and challenging medical career, Dr. Hill, the AECP’s most active volunteer physician, has traveled to Armenia more than 20 times at his own expense.

While there, he has conducted thousands of eye exams and performed countless surgeries that have changed the lives of innumerable Armenians, many of them children. Along with the protracted hours he spends performing surgery and examining patients in Armenia, Dr. Hill has developed and written an advanced medical and surgical ophthalmology residency curriculum, adopted by Armenia for its medical training programs.

On the last day of his 1998 medical mission in Armenia, Dr. Hill was catching some much-needed sleep before boarding the morning flight back to the States. After a full day of seeing patients, he found himself being gently shaken awake. A family had brought their child, suffering from congenital glaucoma, to the clinic. When they heard about the American doctors and their work in Yerevan, the family traveled all the way from Ukraine. Dr. Hill could not refuse their request for help.

“I have no idea where the energy comes from,” he says. “But it does… and a few minutes later we were back in the operating room.”

What happened next presented Dr. Hill with an immense challenge. “As I passed a small blade across the inside of the eye, the power failed,” he said, adding that because the country was at war at the time, blackout curtains were over the windows so it was extra dark. “If I moved one millimeter the wrong way, I could blind the child. Suddenly, my four-cell krypton diving light, which the Operating Room nurse had sterilized and wrapped in case of an emergency, snapped on and I was able to finish the surgery. Another triumph for Armenian ingenuity.”

Two years later, Dr. Hill was pulled from a conference and told his patient was asleep in the operating room awaiting an examination. “As I filed past the long rows of watchers, I realized it was the child I operated on two years ago. He had not seen a doctor for two years because I had done the surgery and, of course, all was well. I tried not to let my fear show or my hands shake as I checked the pressure,” he explains. “The pressure was completely normal and, by history, the child was developing excellent vision. The parents were surprised that I would have any concerns. They knew everything was perfect after the surgery.”

“Personally, for me, this was an amazing display of faith,” Dr. Hill recalls. “I think of this child often when I need inspiration or motivation.”