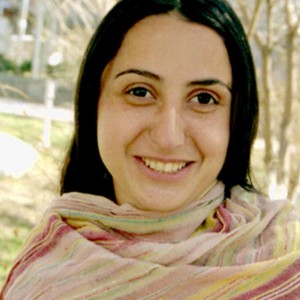 A first look at Christine Hajinyan does not disclose anything unusual about her.  But, a few minutes into the conversation, Christine reveals one devastating story after another.  She was only nine when her brother found a pistol lying on the ground in their courtyard in Avan, one of the communities on the outskirts of Yerevan.  The children had just started exploring the deadly “toy” when the gun went off, instantly killing Christine’s 8-year-old brother and completely destroying Christine’s left eye and causing her severe abdominal injuries.

The family, shocked and devastated by her brother’s death, had to take quick action to save Christine’s life.  Following a number of complicated surgeries, Christine began her recovery. However, she never regained sight in her left eye.

It took a number of years for the devastated family to save enough money for Christine’s eye prosthesis.  “The doctors recommend changing it each year, but it is too expensive,” Christine says. “The pain is so intense I have to take medicine to open my eye.”

Years after her accident, Christine was faced with yet another tragedy.  Both her parents had died, leaving her totally alone by the age of 18.  Christine’s mother died of cancer and her father died just a few months later of a heart attack.  Since their deaths, Christine has worked as a cleaner in local cafes and restaurants trying to make ends meet.  She says that as soon as employers learn about her eye injury, she is usually fired in just a few weeks.  “They assume I cannot clean well because I have only one eye,” she says.

Because her prosthesis has not been changed for several years, her injury is more visible and it’s hard for her to find a job.  Christine survives on a meager disability allowance paid by the State, which is less than $20 a month.

“Even if I were to save most of my money for an entire year I could never afford the cost of prosthesis replacement, which is $200,” said Christine.

But as Christine leaves the Armenian EyeCare Project’s Yerevan office, she is smiling.  With a new eye prosthesis donated by the Project, Christine hopes to find a better job, save enough money to complete her interrupted school studies and to eventually become a nurse.

“I would really like to become a nurse so I can help people,” she says.