The Injury Heals but the Social Isolation Can Last a Lifetime 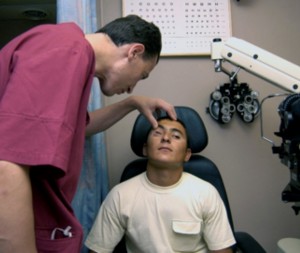 Boys lose sight in land mine accidents. Blindness and Social Exclusion as a result of tragic land mine explosions, the lives of three boys from three different communities across Nagorno-Karabakh changed dramatically in 1993. Seconds before all three explosions the children were playing peacefully-exploring the new deadly “toys” found on the streets of their villages-hand grenades, detonators, land mines and pallet bombs.

More than a decade later the faces of young men still bear the scars of the explosions that left them blind and scared. But, more than the scars, the young men have had to face the stigma of these injuries and the social isolation associated with them. All have been forced to struggle with the label of “disabled” for the rest of their lives.

But, the Armenian EyeCare Project sees three young men whose lives can be transformed. With surgery and eye prosthetics. The AECP can provide a prosthesis that will help break the cycle of social exclusion for these young men and ensure treatment to save the remaining vital vision of their healthy eyes. For these men it is the only way they can return to a normal life and for the first time in many years remove the dark glasses that separate them from the rest of the world.

“I dream about removing my dark eyeglasses to be able to see the world in its natural colors,” says 17 year-old Arthur Minasyan. Arthur was only four when a hand grenade exploded in his hand instantly killing his younger brothers and severely injuring his sister and himself.

“People say I have a good voice and I’d like to become a singer, but because of my eye injury I feel shy to perform,” says Gagik Harutuynyan. Gagik, now seventeen, has lived with his eye injury since he was five.

Zorik Arakelyan says, “I would like to get married soon and have a family, but feel ashamed of my disability.”

During the war over Nagorno-Karabagh, more than 900 square kilometers of the disputed territory was implanted with landmines. Twelve years after the conflict, thousands of land mines in Nagorno-Karabakh still result in casualties and prevent many hectares of agricultural land from being cultivated. Land mines, unexploded hand grenades and pallet bomb fragments pose the greatest threat to children, who do not recognize the weapons or handle them as toys.

The victims of such explosions not only have to deal with the reality of living with partially or no sight, but also suffer from social and professional exclusion. As children and later as adults, they are often faced with the stigma associated with wearing an eye patch or dark eye shades resulting in deep psychological trauma. The majority of these people live isolated lives -in their homes or in institutions. The Armenian government allocates a small monthly allowance-about $20 USD for children and adults with disabilities, failing to provide even for their basic needs or medical care.

The Armenian EyeCare Project reaches out to people in need by providing free of charge screening, treatment, surgery and post-surgical follow up in the most remote locations. During the MEH’s recent trip to Karabagh in August 2006, Arthur, Gagik and Zorik underwent extensive examinations on the MEH and received professional advice that will help them maintain the vision in their healthy eye.

For young adults like Arthur, Gagik and Zorik an eye prosthesis will enable them to escape the social isolation they have experienced since childhood. It is a real chance for them to rejoin the world, welcome new opportunities and have their dreams come true.

At age ten, Zorik Arakelyan saw a group of young children playing with a land mine. He rushed and grabbed the explosive from their hands and tried to throw it as far as possible. But before he could get rid of the detonator, it exploded in his hand, causing major injuries to his abdomen and completely destroying his left eye.

It was not the first tragedy in his mother’s life. Zorik lost her husband during the Karabagh war, leaving her with three boys to care for alone. For this she receives a meager state allowance of 18 USD per month.

Looking back at his life Zorik never regrets what he did to save the children. “I am happy that nothing happened to those children, that is very important for me,” shares Zorik. When asked if he would do anything differently, Zorik replies in a quiet, but firm tone, “no.”

At 23, Zorik cares for his mother and his two younger brothers by working the small plot of land the family owns-growing vegetables and fruit-he is the primary provider for the family. Zorik Not afraid to take on more responsibility, Zorik dreams of getting married and having a family with four children one day. The only thing that keeps him from proposing to the girl he secretly loves is his obvious eye injury.

Arthur Minasyan was just four years old when a grenade exploded in his hand. It killed his two younger brothers instantly and severely injured his youngest sister and himself. They were playing on a street in their village of Khanabar, a half-hour drive from Stepanakert, the capital of Nagorno-Karabakh.

During a frantic six-hour drive to Yerevan Arthur fell in and out of consciousness. When he arrived at the hospital doctors said hope for Arthur’s survival was slim. Arthur’s Aunt Karine said. Three days later, Arthur opened his eyes-doctors and family members were overjoyed. Arthur’s sight in his right eye could not be saved, but his life was. “We were so relieved that Arthur was alive that we did not think about or anticipate the long-term consequences of Arthur’s injury, said Karine.

Following the initial shock of losing two of her children, Arthur’s mother faced the reality of caring for Arthur and his sister on her own-her husband died in the Nagorno-Karabakh conflict at 33. She supports her family on a small salary as a cleaner in a Khanabar village school, struggling to provide basic food and shelter for her family.

Arthur quit school after the eighth grade to help his mother support their family by doing agricultural work for his family and their neighbors. He talked about the stigma he faces each day from his injury. “People think that because I wear an eye patch or dark glasses that I am not able to work,” he says regretfully.

Arthur looks forward to receiving an eye prosthesis from the AECP so he will be able to start working and earn enough money to send his younger sister to college. In his unselfish desire to find a better job to pay for his sister’s education, Arthur wants a tiny bit for himself -“to take off my dark glasses and to be able to see the world in its natural colors.”