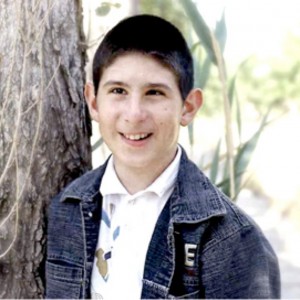 Arshaluis was just a month old when his parents, Gayaneh Matevosyan and Arthur Nerkararyan, were told that he had a congenital cataract in both eyes and could not see.  Gayaneh and Arthur immediately decided that they would do everything in their power to help their son lead a normal life.

At the age of two, Arshaluis underwent surgery to remove the clouded lenses in both eyes, but he was too young to receive intraocular lenses (IOLs.)  The boy wore thick glasses to gain as much sight as possible.  Gayaneh, a school teacher, and Arthur, a veterinarian, refused to register their son as having a disability because they did not want him to be treated as disabled.  They sent him to a regular school “ready to face the challenge.”  They worked closely with their son, helping him read and write — and even ride a bicycle — like the other kids.

When Arshaluis became a teenager, he was old enough to undergo IOL implant surgery to improve his eyesight, but his family could not afford it.  After losing their home in the 1988 earthquake, the family lived in a makeshift dwelling for seven years before moving to the town of Amranist to live in a vacant house.  They’ve been trying to rebuild their original home for years, but progress is slow because they invest most of their limited earnings in their son’s health.

New York resident Anna Sargsyan-Demerjian, originally from Stepanavan, became aware of Arshaluis’ situation through her mother, a teacher who had worked with the boy’s aunt.  Her mother met Arshaluis and was very impressed by the way he and his mother worked together to read books and prepare his homework assignments.  Anna, familiar with the work of the EyeCare Project through the organization’s newsletters and website, hoped that she could find help for Arshaluis and his family.  She contacted the AECP office in California and discovered that, fortuitously, the AECP Mobile Eye Hospital was in the Lori region and that the American doctors would soon be traveling to Armenia as part of their 26th Medical Mission.

In June 2005, during the AECP’s Medical Mission, Arshaluis was examined in Yerevan by AECP Founder Roger Ohanesian and then received an intraocular lens (IOL) in his right eye.  Ohanesian, accompanied by Armenian doctors Ruzanna Harutyunyan and Armine Grigorian, performed the surgery.  Following the surgery, Arshaluis developed a small complication — a fibrose coating on his eye — that was successfully treated with a laser procedure.  All of these services were offered at no charge to Arshaluis’ family.

Both the boy and his parents are very happy with the results.  “His vision improved dramatically,” said Arshaluis’ mother, “It may not seem like much to others, but to us it makes a huge difference. It’s all about quality of life.”