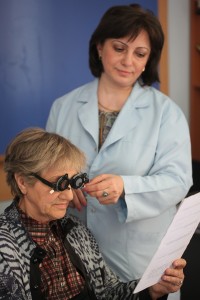 “I will see light,” said Taisa Chirkova, an 86-year-old woman living at the Nork Nursing Home in Yerevan.  “What else is there to wish? There is hardly anything more than that.”

The Armenian EyeCare Project visits nursing homes across Yerevan often, providing eye exams to its many residents.  Approximately 900 elderly people live in six nursing homes throughout Armenia.  For a nation steeped in traditions of strong family ties and extended family support, Armenians view the need for these homes with increasing concern.

Older Armenians who live in nursing homes come from socially vulnerable families.  They are identified as adult “orphans” and “abandoned parents” — single and lonely.  A few residents are temporary, placed in the nursing homes by their families in the winter and then taken back during warmer seasons.  Many are refugees.  But all come from many different walks of life, rural and urban areas alike, and need all the help they can get.

About 250 nursing home residents in Yerevan have received eye exams by the AECP and its doctors.  Alex Malayan, Director of the Malayan Ophthalmological Center, performed 31 surgeries in the Mobile Eye Hospital (MEH), and 10 residents received laser treatments.  In addition, about 100 nursing home residents were referred for follow-up and extensive examinations.  For five days, the MEH was parked in the front yard of the Haghtanak Nursing Home.  For the AECP medical staff, it was an exciting opportunity to help special people in need.

While visiting with and examining residents, some staff experienced mixed emotions.  It was rewarding to receive blessings from the older people, whose sight they restored.  Yet, as Dr. Irina Buniatyan said, “We feel much sadness for these people who have to stay in this miserable shelter.  Though some of them have children who are quite well-off and once had good jobs, now they have no resources.”

Still, for nursing home residents, the arrival of the Mobile Eye Hospital generates excitement.  The MEH has always been surrounded by people yearning to socialize — to talk with others, but more importantly, to have someone listen to them and give them attention, both social and medical.

Zhora Gasparyan, a 68-year-old male resident of Haghtanak Nursing Home, where 70 percent of residents are women, joked, “Who knows? Maybe if I see at least with one eye, I will get married.”

Directed by David Shahbazyan, Haghtanak Nursing Home hosts 230 residents, with the average age of residents being 75.

Shahbazyan shares the perks of the MEH, saying “We have already had screening missions, including eye screening, but this was the first time that a comprehensive approach was shown that allowed not only to identify the patients and examine our bed-ridden residents, but also to organize treatment here, as the MEH was stationed in the premises of our institution.”

Arus Harutunyan, a 79-year-old Haghtanak resident, said, “I can’t believe I will be able to see after so many years,” adding that, before, both of his eyes were blind.

At Nork Nursing Home, directed by Andranik Danielyan, there are 220 residents.  Like Haghtanak, the average age here is also 75 and most residents are women.

“Vision problems are common for the elderly,” Danielyan explains. “The AECP initiative was very timely and well organized.  Our residents were screened for eye diseases; many received laser treatment and underwent surgery in the MEH.  The doctors also gave us follow-up treatment plans for patients with difficult-to-treat eye disease and we will make sure they get the care they need.”

Those who received care are grateful for AECP’s attention.  “Thank you so much for coming!” said 81-year-old Nork resident Sofia Keropyan.  “I am deeply moved by the attention. We are really lonely here, with no relatives left.  It’s so good that there are people who care about us.”