The Syunik Marz is 4,506 square kilometers (15.1 percent of Armenian land) and has a population of 153,000 people with a population density of 34 persons per square kilometers. Urban dwellers account for 67.7 percent of the population and 21.4 percent live in rural areas. There are 109 communities — 7 urban and 102 rural — and 135 settlements of which 105 are borderline and high mountainous. The length of Syunik’s border is 472 kilometers with 42 kilometers bordering the Islamic Republic of Iran and 110 kilometers bordering Azerbaijan, an autonomous region of Nakhijevan.

Syunik contributes 18 percent of Armenia’s total production from mining production — natural minerals include copper, gold, and molybdenum — and electricity production and processing. Syunik’s agricultural production is about 6 percent of Armenia’s total. Syunik has a number of challenges including 18 communities with serious landslide problems; difficult communication because the region is “sliced” by mountain chains; and a hazardous environmental situation with 29 operating mines (46 existing mines) and waste collection centers.

Syunik has 118 secondary schools with 14,307 students. In 2012-2013 there were 1,507 first class students. Higher education is taught in affiliated state universities and institutes located in the cities of Kapan, Goris, and Sisian. The region has two dramatic theatres, six museums, 130 libraries, 15 musical and art schools and seven cultural centers.

Armenians living in the provinces of Kajaran and Meghri where there are no ophthalmologists see family doctors for eye care. Because surgeries are performed only in Kapan residents of other cities and villages go to Kapan or Yerevan for surgery.

Though some surgeries take place in Kapan, it is still requested that the new regional center be centered in Kapan, given the geographic specifics of the region. The other option is Goris if the residents from the Nagorno Karabagh Republic make use of the services as well. The residents of the marz usually refer to local ophthalmologists for diagnosis, conservative treatment and eyeglass prescription, however for surgery or any other complications, they have to go to Yerevan.

Given the geographic specifics of the Syunik marz, its remoteness from Yerevan and limited opportunities for high quality surgery, bi-annual visits of the Armenian EyeCare Project have greatly contributed to the mitigation of urgent eye care problems of the population. The population at large has had the possibility to have free of charge preventive screening, eyeglass prescription, detailed diagnosis and laser treatment on the MEH, while the vulnerable layers got free of charge high quality surgery performed on the MEH. The table below details the numbers of the Project’s work in Syunik.

During the AECP’s last mission to Syunik 3.3 percent of the people screened were diagnosed with advanced glaucoma, 18.1 percent with cataract, 1.5 percent corneal disorders and 14. 6 percent with fundus disorders. Using this data and the demographic characteristics of the Syunik region we estimated the prevalence of the primary eye diseases among the overall adult population (16 and over) in Syunik. 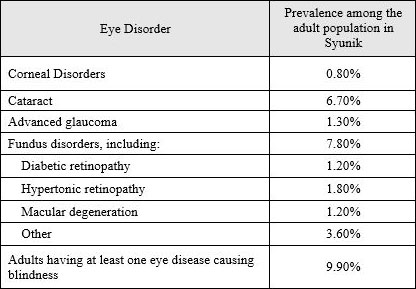 Of the ten percent of the people in Syunik who have at least one blinding eye disease, the AECP is only permitted to provide advanced treatment with surgery and laser procedures for those who are officially recognized as vulnerable or poor. All others must be treated in Yerevan for a fee.

According to authorities in Syunik, the best location for an eye center is the Kapan Medical Center in the capital city of Kapan. This location will attract the largest number of residents including those from the remote areas of Meghri, Agarak, Kajaran and Dastakert. The space for a Regional Center in Kapan will be secured by the regional authorities and is their contribution to the project.

It is essential that the Regional Eye Center in Syunik have a permanent and highly qualified and trained staff, which will include a surgical ophthalmologist, ophthalmological nurses and other ancillary personnel. If local ophthalmologists and/or surgical nurses are used they will be screened through extensive interviews and testing to ensure they have the qualifications and experience necessary to serve as the primary surgical ophthalmologist and director of the center. If they assume a local position the AECP will provide training along with mentors — a chief surgeon and a surgical nurse who will assist in surgeries and help the local staff gain the skills, confidence and the trust of Syunik residents.

After ten years of providing eye care services at no charge to the patient, the AECP is considering the possibility of introducing a fee-for-service component to its charitable program. As a nonprofit organization, the AECP will continue to pursue its mission to eliminate preventable blindness and to provide access to quality eye care for all Armenians. Going forward, in addition to providing surgery and other advanced care to the vulnerable population at no charge, the AECP will provide services for all income groups for a fee. This will enable the Project to continue its programs for the poor at no charge and ensure the sustainability of the Regional Center and the AECP program.

For budgeting purposes the AECP will estimate patient load and income based on the number of surgeries the AECP Mobile Eye Hospital performs — average of 354 surgeries and 118 lasers per visit in Lori. However, it is assumed that this number will be significantly higher since the MEH is in Lori only once every two years. Fees for services will be comparable to those charged in Yerevan and Gyumri. The Project estimates: