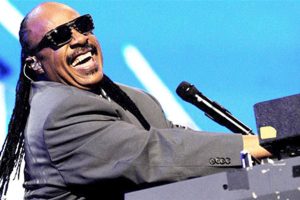 Born blind on May 13, 1950, in Saginaw, Michigan, singer, songwriter and multi-instrumentalist Steve Wonder made his recording debut at age 12. He recorded his first hit single in 1963. Over the next decade, Wonder recorded several hit songs, including “Living in the City,” “Boogie on a Reggae Woman” and “Isn’t She Lovely.” His fertile period came to an end in 1979. Wonder’s 1980s hits include “I Just Called to Say I Love You” and “Ebony and Ivory.” He was inducted into the Rock and Roll Hall of Fame in 1989.

Stevie Wonder was born Steveland Hardaway Judkins on May 13, 1950, in Saginaw, Michigan. Blind as a result of receiving too much oxygen in the incubator as a premature baby, Wonder showed an early gift for music, first with a church choir in Detroit, Michigan, where he and his family had moved to when he was 4 years old, and later with a bevy of instruments, including the harmonica, piano and drums, all of which he taught himself before age 10.

Stevie Wonder was just 11 years old when he was discovered by Ronnie White of the Motown band the Miracles. An audition followed with Motown founder Berry Gordy Jr., who didn’t hesitate to sign the young musician to a record deal. In 1962, the newly renamed Little Stevie Wonder, working with a Motown songwriter, released his debut album, Little Stevie Wonder the 12 Year Old Genius.

The record, which included the hit “Fingertips,” was an immediate hit. But rather than rest on his laurels, the hard-working Wonder, who would go on to study classical piano, pushed to improve his musicianship and songwriting capabilities. After dropping “Little” from his stage name in 1964, he churned out the successful single “Uptight (Everything’s Alright).”

Due in part to his innate talent, but also because of his deep commitment to his craft, Stevie Wonder faced the difficulty of staying relevant as a musician as he grew from boy to man. In 1971, Wonder, who had begun writing his own music, negotiated a new contract with Motown that gave him almost total control over his records and greatly increased his royalty rate.

It was an unprecedented concession by Gordy, but, artistically, it was just what Wonder needed. As the 1970s unfolded, the musician went through an unrivaled period of production. Over the course of four outstanding albums, Talking Book (1972), Innervisions(1973), Fulfillingness’ First Finale (1974) and Songs in the Key of Life (1976), Wonder created some of the most indelible songs in popular music history. The collection included a number of hugely popular singles, including “Living in the City,” “Boogie on a Reggae Woman” and “Isn’t She Lovely.” In all, Wonder captured 15 Grammy Awards during the decade.

By those incredible lofty standards, the 1980s weren’t nearly as successful for Wonder. Still, he proved to be a huge musical force, creating a collection of hits that included the soundtrack single “I Just Called to Say I Love You” for the Gene Wilder film The Woman in Red (1984). Like so much of Wonder’s work, the song crossed racial lines, paving the way for it to become Motown’s biggest international hit of all time. The single also won Wonder an Academy Award.

In 1982, Wonder teamed up with Paul McCartney for the No. 1 single “Ebony and Ivory.” The 1980s also saw Wonder, who’s never been afraid to tackle social issues through his music, successfully spearhead a movement to create a national holiday recognizing Dr. Martin Luther King Jr.

Over the course of his long career, Wonder, who has been married twice and has seven children, has been honored with numerous awards. He has won 25 Grammy Awards, including a Grammy Lifetime Achievement Award (1996). In 1989, Wonder was inducted into the Rock and Roll Hall of Fame. More recently, in 2009, he was recognized with the Second Library of Congress Gershwin Prize for Popular Song.

In recent years, Stevie Wonder’s studio production has slowed. He released A Time to Lovein 2005, following a 10-year hiatus. Wonder also put out the concert DVD Live At Last: A Wonder’s Summer Night in 2009.

The following year, Wonder made headlines when it was announced that he would perform in Marrakesh on June 28, 2013, in an effort to make good on his earlier promise to host a concert if negotiators concluded an international treaty providing blind and visually impaired individuals worldwide with more access to books. According to the World Intellectual Property Organization, a treaty to do just that was adopted by more than 600 negotiators from 186 states on June 27, 2013, at a United Nations-backed forum.

Later that year, Wonder revealed that he is working on new material. He expects to release two new albums, When the World Began and Ten Billion Hearts, in 2014. Wonder has been working with producer David Foster on these records. He also wants to do a gospel album in tribute to his late mother Lula Mae Hardaway.