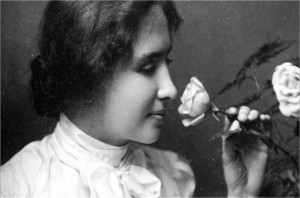 Helen Adams Keller was born on June 27, 1880 in Tuscumbia, Alabama. In 1882, she fell ill and was struck blind, deaf and mute. Beginning in 1887, Keller’s teacher, Anne Sullivan, helped her make tremendous progress with her ability to communicate, and Keller went on to college, graduating in 1904. In 1920, Keller helped found the ACLU. During her lifetime, she received many honors in recognition of her accomplishments.

Helen Keller was the first of two daughters born to Arthur H. Keller and Katherine Adams Keller. She also had two older stepbrothers. Keller’s father had proudly served as an officer in the Confederate Army during the Civil War. The family was not particularly wealthy and earned income from their cotton plantation. Later, Arthur became the editor of a weekly local newspaper, the North Alabamian.

Keller was born with her senses of sight and hearing, and started speaking when she was just 6 months old. She started walking at the age of 1.

LOSS OF SIGHT AND HEARING

In 1882, however, Keller contracted an illness—called “brain fever” by the family doctor—that produced a high body temperature. The true nature of the illness remains a mystery today, though some experts believe it might have been scarlet fever or meningitis. Within a few days after the fever broke, Keller’s mother noticed that her daughter didn’t show any reaction when the dinner bell was rung, or when a hand was waved in front of her face. Keller had lost both her sight and hearing. She was just 18 months old.

As Keller grew into childhood, she developed a limited method of communication with her companion, Martha Washington, the young daughter of the family cook. The two had created a type of sign language, and by the time Keller was 7, they had invented more than 60 signs to communicate with each other. But Keller had become very wild and unruly during this time. She would kick and scream when angry, and giggle uncontrollably when happy. She tormented Martha and inflicted raging tantrums on her parents. Many family relatives felt she should be institutionalized.

Looking for answers and inspiration, in 1886, Keller’s mother came across a travelogue by Charles Dickens, American Notes. She read of the successful education of another deaf and blind child, Laura Bridgman, and soon dispatched Keller and her father to Baltimore, Maryland to see specialist Dr. J. Julian Chisolm. After examining Keller, Chisolm recommended that she see Alexander Graham Bell, the inventor of the telephone, who was working with deaf children at the time. Bell met with Keller and her parents, and suggested that they travel to the Perkins Institute for the Blind in Boston, Massachusetts. There, the family met with the school’s director, Michael Anaganos. He suggested Helen work with one of the institute’s most recent graduates, Anne Sullivan. And so began a 49-year relationship between teacher and pupil.

In March 1887, Sullivan went to Keller’s home in Alabama and immediately went to work. She began by teaching Helen finger spelling, starting with the word “doll,” to help Keller understand the gift of a doll she had brought along. Other words would follow. At first, Keller was curious, then defiant, refusing to cooperate with Sullivan’s instruction. When Keller did cooperate, Sullivan could tell that she wasn’t making the connection between the objects and the letters spelled out in her hand. Sullivan kept working at it, forcing Helen to go through the regimen.

As Keller’s frustration grew, the tantrums increased. Finally, Sullivan demanded that she and Keller be isolated from the rest of the family for a time, so that Keller could concentrate only on Sullivan’s instruction. They moved to a cottage on the plantation.

In a dramatic struggle, Sullivan taught Keller the word “water”; she helped her make the connection between the object and the letters by taking Keller out to the water pump, and placing Keller’s hand under the spout. While Sullivan moved the lever to flush cool water over Keller’s hand, she spelled out the word w-a-t-e-r on Helen’s other hand. Keller understood and repeated the word in Sullivan’s hand. She then pounded the ground, demanding to know its “letter name.” Sullivan followed her, spelling out the word into her hand. Keller moved to other objects with Sullivan in tow. By nightfall, she had learned 30 words.

In 1890, Keller began speech classes at the Horace Mann School for the Deaf in Boston. She would toil for 25 years to learn to speak so that others could understand her. From 1894 to 1896, she attended the Wright-Humason School for the Deaf in New York City. There, she worked on improving her communication skills and studied regular academic subjects.

Around this time, Keller became determined to attend college. In 1896, she attended the Cambridge School for Young Ladies, a preparatory school for women. As her story became known to the general public, Keller began to meet famous and influential people. One of them was the writer Mark Twain, who was very impressed with her. They became friends. Twain introduced her to his friend Henry H. Rogers, a Standard Oil executive. Rogers was so impressed with Keller’s talent, drive and determination that he agreed to pay for her to attend Radcliff College. There, she was accompanied by Sullivan, who sat by her side to interpret lectures and texts.

In 1905, Sullivan married John Macy, an instructor at Harvard University, a social critic and a prominent socialist. After the marriage, Sullivan continued to be Keller’s guide and mentor. When Keller went to live with the Macys, they both initially gave Keller their undivided attention. Gradually, however, Anne and John became distant to each other, as Anne’s devotion to Keller continued unabated. After several years, they separated, though were never divorced.

After college, Keller set out to learn more about the world and how she could help improve the lives of others. News of her story spread beyond Massachusetts and New England. She became a well-known celebrity and lecturer by sharing her experiences with audiences, and working on behalf of others living with disabilities. Throughout the first half of the 20th century, Keller tackled social and political issues, including women’s suffrage, pacifism and birth control. She testified before Congress, strongly advocating to improve the welfare of blind people. In 1915, along with renowned city planner George Kessler, she co-founded Helen Keller International to combat the causes and consequences of blindness and malnutrition. In 1920, she helped found the American Civil Liberties Union.

When the American Federation for the Blind was established in 1921, Keller had an effective national outlet for her efforts. She became a member in 1924, and participated in many campaigns to raise awareness, money and support for the blind. She also joined other organizations dedicated to helping those less fortunate, including the Permanent Blind War Relief Fund (later called the American Braille Press).

Soon after she graduated from college, Keller became a member of the Socialist Party, most likely due in part to her friendship with John Macy. Between 1909 and 1921, she wrote several articles about socialism and supported Eugene Debs, a Socialist Party presidential candidate. Her series of essays on socialism, entitled “Out of the Dark,” described her views on socialism and world affairs.

It was during this time that Keller first experienced public prejudice about her disabilities. For most of her life, the press had been overwhelmingly supportive of her, praising her courage and intelligence. But after she expressed her socialist views, some criticized her by calling attention to her disabilities. One newspaper, the Brooklyn Eagle, wrote that her “mistakes sprung out of the manifest limitations of her development.”

In 1936, Keller’s beloved teacher and devoted companion, Anne Sullivan, died. She had experienced health problems for several years and, in 1932, lost her eyesight completely. A young woman named Polly Thompson, who had begun working as a secretary for Keller and Sullivan in 1914, became Keller’s constant companion upon Sullivan’s death.

In 1946, Keller was appointed counselor of international relations for the American Foundation of Overseas Blind. Between 1946 and 1957, she traveled to 35 countries on five continents. In 1955, at age 75, Keller embarked on the longest and most grueling trip of her life: a 40,000-mile, five-month trek across Asia. Through her many speeches and appearances, she brought inspiration and encouragement to millions of people.

Keller’s autobiography, The Story of My Life, was used as the basis for 1957 television drama The Miracle Worker. In 1959, the story was developed into a Broadway play of the same title, starring Patty Duke as Keller and Anne Bancroft as Sullivan. The two actresses also performed those roles in the 1962 award-winning film version of the play.

Keller suffered a series of strokes in 1961, and spent the remaining years of her life at her home in Connecticut. During her lifetime, she received many honors in recognition of her accomplishments, including the Theodore Roosevelt Distinguished Service Medal in 1936, the Presidential Medal of Freedom in 1964, and election to the Women’s Hall of Fame in 1965. She also received honorary doctoral degrees from Temple University and Harvard University and from the universities of Glasgow, Scotland; Berlin, Germany; Delhi, India; and Witwatersrand in Johannesburg, South Africa. Additionally, she was named an Honorary Fellow of the Educational Institute of Scotland.

Keller died in her sleep on June 1, 1968, just a few weeks before her 88th birthday. During her remarkable life, Keller stood as a powerful example of how determination, hard work, and imagination can allow an individual to triumph over adversity. By overcoming difficult conditions with a great deal of persistence, she grew into a respected and world-renowned activist who labored for the betterment of others.